Album Review: Eric Anders and Mark O’Bitz – Of All These Things 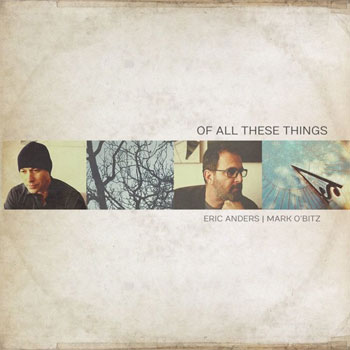 If you’re one of the discerning fans who heard and appreciated the music Pete Yorn made in the first decade of this new century – musicforthemorningafter, Day I Forgot and especially Nightcrawler – then you owe it to yourself to seek out this new release. With breathy, close-miked vocals, swoonworthy vocal harmonies and keening, beautiful pedal steel guitar, Of All These Things is very much a piece with Yorn’s early work.

Anders is nominally a folk artist, but he has a pop sensibility that makes his thoughtful and melancholy songs more catchy and memorable than garden-variety folk music. His voice and acoustic guitar are at the sonic center of most all of the album’s ten songs, but subtle splashes of other instrumentation add tone color throughout. Occasionally – as on “Eyes of Your Loves” Anders threatens briefly to rock out, but in the end he doesn’t. Nor does he need to. His vocals are out front, and the instrumentation provides sympathetic backing.

“I Used to Be Another” displays a bit more country and western influence, and “Time’s Gone” is the closest the album comes to straight folk. There’s both a unity of musical approach and subtle variety among the songs; while the energy level rarely changes, Of All These Things holds the listener’s interest from start to finish.