Album Review: Alien Country – Like My Life Depends On It 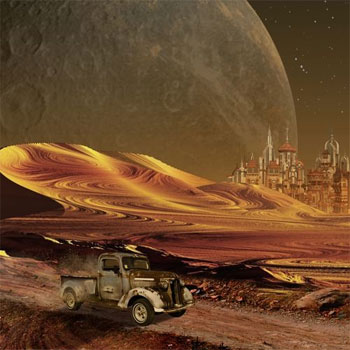 A few years back, I recall there was a motion picture called Cowboys and Aliens or somesuch. Based only on the title – I didn’t care to investigate further – I found the film’s high-concept premise to be, well, stupid. So when I came across Like My Life Depends On It, the new album by a group calling itself Alien Country, my initial reaction was similar. Then I saw the cover art, which did nothing to change that first impression. But what the hell, I thought, why not listen? And so I did.

Good thing. Like My Life Depends On It has little or nothing to do with cowboys lasso-roping little green men. It’s more of a boot-scootin’ good time, with sturdy songwriting and playing. There’s a loose, spashy feel to the drums that gives the whole affair a rough-hewn, honky-tonk vibe. The overlapping vocals on “Relaity Check” suggest that our heroes may have consumed a few to many Fireball shots (or funneled one too many Michelob Ultras) but it’s fun in a loose-limbed kind of way.

The hoary vocals sometimes recall Jerry Garcia at his, well, hoariest, but somehow that suits the music. This album certainly doesn’t fit into the insipid bro-country genre, nor does it quite make the grade as Americana. But as current-day c&w it’ll work just fine. And that’s enough.