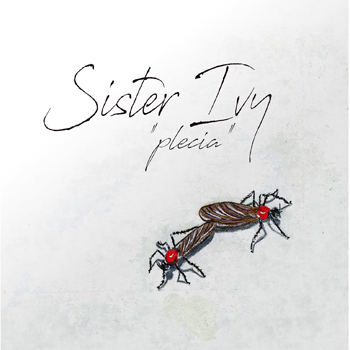 Sister Ivy is an Asheville-based project, the nom de musique of Rachel Waterhouse. Sister Ivy has had a relatively lengthy gestation period: the group played its first gig some three years ago at the old Sherwood Music. But quality takes time, and the refined, sultry character of Waterhouse’s original music has surely benefited from the time she and her band mates have taken.

“Plecia” is a three-song EP, recorded last year and officially released in late March of 2018. “Dark Magic” is built around Waterhouse’s soulful, understated jazzy vocal lines, with subtle electric piano joined by equally restrained guitar, bass and drums. The old adage about the spaces between the notes being every bit as important as the notes themselves is illustrated here: the airy arrangements give plenty of space for vocals and instruments to breathe.

Waterhouse has an expansive vocal range and impressive control of that instrument; she also applies taste, a quality seemingly little valued in today’s America’s Got Talent-focused musical landscape. On “Dark Magic,” she never over-sings, never over-emotes. When Waterhouse wants to emphasize a vocal line, she’s as likely to do so by lowering her voice as raising it; she might deliver lyrics rapid-fire, or she might linger deliciously over a phrase. But it’s all done with intent, and in service of the song, not in a showy manner.

“Nu V.U.” has a similar character to the EP’s opening track, but with a neo-soul vibe that simultaneously recalls Steely Dan and Zero 7. Waterhouse’s songs are complex creations that often sound deceptively simple. There’s a lot going on in the arrangement, and Anthony Dorion’s mixing skills let the attentive listener pick out every nuance.

Or, listeners can immerse themselves in the whole soundscape, letting it wash over them. Even when guitarist Kayla Zuskin takes an extended solo on “Nu V.U.’ the music never loses its plot, and the slinky feel never subsides. Even a bass solo—so often the butt of musician jokes—is a model of taste in the capable hands of Brennan Dugan. And Waterhouse’s multitracked vocal lines seem to circle around one another, dancing amid the subtle ambience of the music. The joyous keyboard solo that plays out the tune is, in its own quiet way, thrilling.

“Song of the Skeleton Woman” is cut from different musical cloth than the two tracks that precede it. Waterhouse begins with a cooing vocal line, followed by some crystalline runs around the scale. The instruments are turned down in the mix, and Zuskin’s electric guitar is given a faraway feel. It’s nearly two minutes into the song before the volume picks up, only to fade into the shadows again soon thereafter. “Song of the Skeleton Woman” is a showcase for the musical contrasts that exist within Sister Ivy’s music.

Ideal for late-night listening, the three songs that make up the “Plecia” EP are a small window into Sister Ivy’s music, but even though the EP runs under 20 minutes, that’s enough time to win over a first-time listener.