A Teenager in Rock: The Regrettes’ Lydia Night (Part Two) 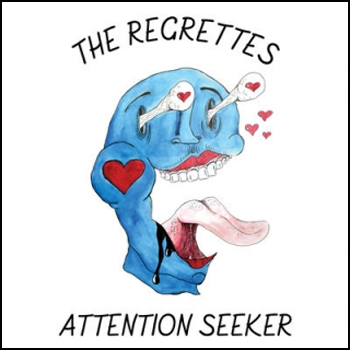 Other than being signed, what was the Regrettes’ first big break?

A really huge moment for us was when we played Conan [The Regrettes performed “Hey Now” on O’Brien’s late-night show on April 11, 2017].That was a really nerve-wracking thing to do, I think.

And you played Coachella last month …

Yeah, and that’s another obvious one. For sure.

Festival gigs can be an opportunity for people to check out bands that they might not otherwise go to see live. How did that Coachella gig go for the Regrettes?

It went really well. I mean, it was so fun. I feel like a lot of people got to see us and find out about us who wouldn’t have if we weren’t on that bill. It was pretty surreal.

Your current tour has a number of dates in the UK. Do you have an established fan base there, or are you kind of starting from scratch?

We’ve toured their once already, so we do have a bit of a fan base there. We toured there with SWMRS back in the fall, and it was incredible.

Really? I didn’t even know that!

… so, what you drew you to decide to cover that one on the new Attention Seeker EP?

I have just always loved that song. It’s been one of my favorites since I was really, really young. I felt like it fit the theme of having different feelings – loving and hating feelings – toward one person. That song just summed it up pretty perfectly.

I suppose the lyrics apply just as much now as they did 60 years ago.

I know you’ve got plenty of original material, but I’m curious if you do any other covers live.

Yeah, we do. We have a couple different covers up our sleeve; we mix it up.

You don’t want to say what those are?

I feel like [doing that] makes it less fun for people who are coming to the show. You’ll just have to come and find out!

How collaborative is the band? When you write a song, have you decided just how the whole thing is supposed to sound, or is it something that the band works out together?

It’s definitely something we work out. I mean, some songs are finished and written already, and then other songs we write together. But no matter what, even if I finish a song, it’s interpreted differently through the whole band.

I think we recorded that a couple months after Feel Your Feelings Fool! In the acoustic version you hear so many different things lyrically you wouldn’t hear in the [original recording]. We just recorded a bunch of acoustic versions because we thought it’d be cool. And then we just picked our favorite one from among those recordings.

The EP also has an acoustic version of “A Living Human Girl,” but that one sounds like it might be a remix of the first album version, just with the electric guitars pulled out.

No, we re-recorded it acoustically. But that song already had that kind of feel, so the difference between the two recordings is less noticeable. It just sounds similar.

Do you prefer playing live over working in the studio, or do you enjoy both equally?

I can’t really compare them; they’re so different. And I don’t really have a preference. Being in the studio is amazing, because it’s a fun process and sort of an intimate thing between the band; it’s really exciting and creative. And then, playing live is an amazing exchange and release of energy. So, they’re both great, and for totally different reasons.

Imagine yourself five years in the future. What might that look like as far as your music?

Hopefully, by then we’ll have another two records out and have toured all over the world. That’s all I can really ask for. I just want to play in as many places – and tour to as many people – as possible.