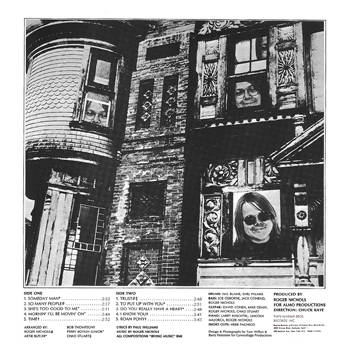 Another characteristic of Paul Williams’ lyrics is their universal quality. Listening to or reading his words, the thoughts and emotions expressed could as easily be coming from a female as from a male. Williams doesn’t dispute that characterization, saying that his lyrics often display “an androgynous, one-size-fits-all heartache. I will always jokingly refer to my songs as co-dependent anthems,” he adds with a chuckle. “I wasn’t hip enough to know that a man just doesn’t say things like that! So I started writing all these needy songs, but generally with the positive break in there, somehow.”

It would be only about a year between the release of Someday Man and Williams’ second solo album, Just An Old Fashioned Love Song. The latter contains several tunes that would become very well-known. The title track had been written for the Carpenters, but pianist Richard Carpenter rejected it; Three Dog Night recorded it instead, scoring a #1 hit single on the U.S. Adult Contemporary chart.

The Carpenters did accept another tune from Williams, “We’ve Only Just Begun.” While the earliest recording of the song was in the form of a television commercial for a bank, it would be the Carpenters’ worldwide smash (#1 U.S., Australia and Canada; #28 UK) that would establish the tune as a standard. Another song from Williams’ second album, “Let Me Be the One” would be a popular track on the Carpenters’ self-titled third album. By the time of Just An Old Fashioned Love Song, it seemed that everything Paul Williams wrote turned to gold.

Around the same time, Nichols and Williams also wrote “Rainy Days and Mondays” (#2 U.S.) for Carpenters, but Williams wouldn’t record and release his own version of the song until 1974’s Here Comes Inspiration, his fourth album. That song’s lyrics are mostly melancholy, but that positive turn Williams describes makes an appearance: “’Funny but it seems I always wind up here with you … and nice to know somebody loves me,’” he says, quoting his own lyric. “So somehow there’s a positivism,” he says, adding with a laugh, “There is very little ‘truck and shotgun’ in the songs that I write.”

Yet another distinctive feature of Williams’ writing style is its personal nature. The feelings and ideas expressed in his words are general enough to apply to a wide variety of listeners, yet somehow specific enough to allow anyone who wishes to take them personally and feel that they express the very things that they feel.

“I think that what I wrote was a response to the world around me and how I fit in it … or didn’t fit in it,” he says. He recalls playing one of his songs for a girlfriend. “Her head was going left and right, like ‘Nuh-uh; we’re not going out tonight.’” But he had misinterpreted her reaction. “She kind of tilted her head to the side, and got a really interesting look on her face,” Williams says. “And then I knew that what I was writing had the capacity to touch people. I had found a way of connecting to people through the songs. And I think that for many years that was my main connection to the world around me.”

But while both Someday Man and its followup did well commercially, neither sold in quantities approaching the Three Dog Night or Carpenters records covering Williams’ songs. Still, the combination of those cover versions’ success and the promotion of his records did serve to get Williams noticed in a big way. “My management said, ‘Let’s get you out and expose you to a large audience,’” he recalls.

He would soon play as an opening act for Liza Minelli, Olivia Newton-John and even Gladys Knight and the Pips. “They made me a Pipsqueak,” he jokes. “I spent a bunch of time on the road with them, and every time I walked onstage and performed for those huge audiences, there were at least eight or nine that kinda liked what I did.” He’s still kidding, but he does make a point: “You do that, and you begin to build an audience.” That he did, parlaying his songwriting success into film and television roles, while continuing to write, record and perform live.

Thing did go wrong for Williams as the 1970s and ’80s wore on; while he continued to be creatively productive, he was succumbing to his addictions. “I think that there was part of me that was separate from the world around me,” he says. “And the drug and alcohol use really exacerbated that. The combination of celebrity – where it’s a task to go on the street – means you can have a tendency to kind of hide out when you’re not performing. And yet you need the affection you’re getting when you are performing.” Displaying the self-knowledge that comes with having done the serious work of recovery, he says of those years, “I became better at showing off than showing up.”

Williams eventually faced his demons and won, getting sober and going on to co-author a book, Gratitude and Trust: Recovery is Not Just for Addicts. He and his wife Mariana (an author and storyteller) married in 2005, and today at age 77 he’s as busy as ever.

The sentimental nature of Paul Williams’ lyrics is unmistakable, and he makes no apology for that. He quotes from yet another song he wrote for the Carpenters, 1974’s Number-one hit “I Won’t Last a Day Without You”: “Day after day I must face a world of strangers where I don’t belong / I’m not that strong.”

“That’s not the sort of thing that a John Wayne would have said or thought,” Williams notes. “But it turns out there are a lot of people in this world who feel more like Paulie Williams than they do like John Wayne.” And Williams’ 1970 album Someday Man was a key early step on his long and successful career of expressing those thoughts and feelings.