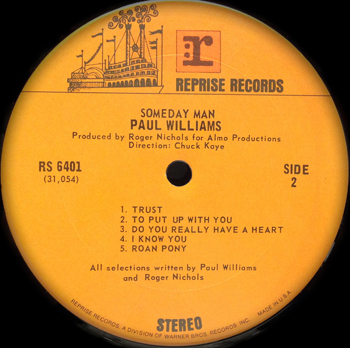 He quotes some of his best-known lyrical phrases to illustrate his point (seemingly, Paul Williams has a preternatural ability to remember the words to the countless tunes he’s penned). “For a guy to be singing about ‘That’s enough for me,’ or, ‘Pleasure makes me cry,’ or, ‘I won’t last a day without you’ – which is not really a healthy thought when you think about it – is a kind of a self-therapy process,” he says. “That, for me, was the immediate reward: dealing with what I was feeling, and getting it out. The big surprise was that people responded to it.”

And that heart-not-head quality to Williams’ writing – embracing sentimentality over cleverness – would be a key to his success, both in his own work and in songs eventually covered by other artists. “I didn’t have the ability – music education or music chops – to write really sophisticated music,” he says, adding that he doesn’t believe that has changed. “But it was something I kept trying to do. Jimmy Webb said to me, ‘Because you have no training, you went places that you shouldn’t have gone and wouldn’t have gone. But for some reason, you made it work.’”

In most every conversation about his music, Williams makes a point of highlighting the contributions of frequent collaborator Roger Nichols. “My ‘music school’ was Roger,” he says. “When he and I began writing, almost everything we wrote was recorded. It was on albums, b-sides, and eventually A-sides. And eventually, because of the nice people that recorded these songs, we had our share of hits. But what people don’t know is that I also got a music education.”

What Williams also got, he emphasizes, was “a friendship that has not faded in the least.” Though he and Nichols would eventually go their separate ways career-wise, the bond they formed as songwriting partners remains solid. Working with Nichols, Williams says he received “exposure to a level of craftsmanship that went comfortably hand in hand with creative genius.”

And while Williams self-effacingly waves away comparisons to Parks, Nilsson, Newman and the like, he doesn’t mind being mentioned among those names. He knew those songwriters as people as well as professionals. Williams relates a story from the very early 1970s.

“I loved Aerial Ballet and Pandemonium Shadow Show,” he says. “When I met Harry, I was going on and on about how brilliant he was. And he went, ‘No, no, no, no, no. I wanna show you real writing, real songwriting.’ He took me out of the room, pulled out his albums and played everything that Randy [Newman] had ever written and recorded.”

Though perhaps it wasn’t viewed as such at the time of its 1970 release, Someday Man can also be seen as part of the then-nascent singer-songwriting movement that included Laura Nyro, Carole King and James Taylor. But Williams chuckles at that suggestion, too. “I think I was a little more greedy,” he says. “There’s such a nobility to that whole Laurel Canyon crowd. I couldn’t really look myself in the mirror if I compared myself with that group, because part of me was also trying to write hit songs!”

He acknowledges that his commercial strategy didn’t exactly succeed. “Every time I tried to write a hit song, it didn’t work!” Understanding that more often than not his success came through others interpreting his work, he says, “There was not a direct line between me and the audience as there was for Jackson Browne or Carole King. I think as soon as Carole started recording, bingo. It was a direct line from Carole’s heart to the hearts of her audience.” For Williams, making that connection would follow a more circuitous route, through Three Dog Night, Karen Carpenter and others.

Rather than counting himself among the art-pop artists of his era or the singer-songwriters, Williams sees himself part of a longer tradition of songwriting. Particularly with regard to his work with Nichols, he views his work as “an interesting throwback combination of writing contemporary music that had some sort of a harmonic, emotional connection to the songs of the Great American Songbook.” As a young boy growing up first in Omaha, Nebraska and then (after his father died in an auto accident) in Long Beach, California, Williams loved the music of Rodgers and Hart, Cole Porter. He recalls that “when everyone was listening to the birth of rock ‘n’ roll, in junior high and high school I was listening to Gordon Jenkins’ Manhattan Tower. I was always an oddball.”

Nichols’ and Williams’ shared love of that romantic kind of songwriting is manifest on the ten-song Someday Man. The pace at which the pair worked on the album was quite fast. And it followed a rhythm the two had developed when writing songs to sell to other artists. “When Roger and I would finish [writing] a song, we’d go right into the studio and cut the demo,” he says. “And more often than not, Roger would have me sing the songs.”

These days, Williams is fit and healthy; during one of the conversations upon which this feature is based, he was doing his daily two-to-four-mile morning run, and he spoke of recently removing sugar and white flour from his diet. And he quit drink and drugs in 1990. But back in the heady days of Someday Man, he indulged in the usual vices.

And in retrospect, Williams acknowledges that such activities had their advantages. “I like a little of what alcohol and cigarettes did to my voice,” he says. “I think that there’s a vulnerability in the vocals. And Roger heard something that I didn’t.” It would be Nichols who would encourage Williams to put together The Holy Mackerel and record an album for Reprise, the label run by Frank Sinatra. The Holy Mackerel included songs written by other group members alongside tunes by Williams and Nichols.