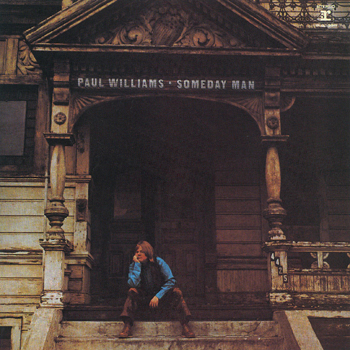 Boutique record label Ship to Shore is releasing a vinyl reissue of Someday Man, the 1970 album by Paul Williams. A singer, songwriter, actor and all-around celebrity, Paul Williams was an ubiquitous fixture of pop culture – especially in the United States – throughout the 1970s. The blond, bespectacled Williams had a hand in the success of some of that era’s biggest names; on his own or with collaborator Roger Nichols, Williams wrote songs that would become massive hits for the Carpenters, Three Dog Night, Helen Reddy, Barbra Streisand and others.

Williams and Nichols wrote songs for the films Bugsy Malone and A Star is Born, and Williams’ acting career included prominent roles in Smokey & the Bandit and a starring role in Brian DePalma’s camp classic Phantom of the Paradise. (Williams also wrote the music for the latter film).

Williams wrote the lyrics to the theme for the long-running TV show Love Boat, wrote the popular song “Rainbow Connection” for the Muppets, and was a frequent guest on Johnny Carson’s Tonight Show, appearing nearly fifty times. To date he has earned a Grammy Award, multiple Golden Globe and Oscar nominations and an Oscar win.

After lowering his profile and going into recovery – he’s been sober 27 years – Williams continued his creative endeavors in a more behind-the-scenes manner. He was elected President of creative rights society ASCAP in 2009 (a position he holds to this day), collaborated with Daft Punk on the duo’s 2013 album Random Access Memories, and appeared in the 2017 film Baby Driver.

But before that staggering run of accomplishments got underway, Paul Williams was a struggling actor – and then a struggling songwriter – trying to eke out a living in Los Angeles. He thought that The Chase, a 1966 Arthur Penn film starring Marlon Brando, would be his entry into a serious film career, but in the end Williams had only a small part in the movie. But while on the set, something happened that helped set in motion the rest of his life. “I bought and started playing with a little guitar,” he says. “And all of a sudden that little guitar and me were sitting up all night.” He began getting together with like-minded musician friends. “They would sit and play my songs with me,” Williams says.

Soon he landed a job in music as a staff songwriter with White Whale Records, the label run by Lee Lasseff and Ted Feigin, and home to the Turtles. While White Whale initially seemed enthusiastic at having Williams on staff, they quickly cooled to the idea. Called into the front office mere weeks after being signed to a $50-a-week deal, Williams was told, “We don’t think you have a future in the music business.” He watched as his contract was torn in two.

Out of work – “I remember going home and thinking, ‘Oh my God, now what do I do? How do I even tell my girlfriend?’” he says – Williams headed over to the record label run by Herb Alpert and Jerry Moss. “I showed up at A&M as an out of work actor in a stolen car,” he says, clearly enjoying the telling of a story he’s shared countless times. “Well,” he adds after a pregnant pause, “it was actually just borrowed.”

Alpert and Moss liked what Williams had to offer, and introduced him to composer Roger Nichols. The two immediately got to work. “Roger played me a melody – which I really liked – and I took it home and wrote lyrics to it,” he says. “I brought it back the next day. It was called ‘It’s Hard to Say Goodbye,’ and was recorded by Claudine Longet.”

Williams scored an early success when his song “Fill Your Heart” (co-written with Biff Rose) was recorded by Tiny Tim and released as the flip of the worldwide smash “Tiptoe Through the Tulips.” David Bowie would cover the song on his 1971 LP Hunky Dory. Williams and Nichols’ “Someday Man” was recorded by the Monkees and featured as the b-side of the 1969 single “Listen to the Band.”

In 1968, Williams assembled a group – primarily as a studio project – called the Holy Mackerel; the rather fluid lineup would feature him plus brother Mentor Williams, former Turtles drummer Don Murray, longtime Elvis Presley bassist Jerry Scheff, and (briefly) Buffalo Springfield drummer Dewey Martin. Reprise Records released the band’s eponymously-titled LP in 1968, by which time The Holy Mackerel had broken up. Neither the album nor any of its three singles would chart.

But shortly after the end of The Holy Mackerel chapter in Williams’ budding career, he embarked on another project, the making of his first solo album. With music by Nichols and lyrics by Williams, Someday Man would be a showcase for the pop music the singer-songwriter was so skilled at creating.

Paul Williams’ songwriting has always had a decidedly mainstream pop character; though he later discovered ’50s rock ‘n’ roll by working his way backward from his beloved Beatles, the songs he wrote generally tended to come down on the soft-pop, folk and even MOR (middle of the road) end of the music landscape. But there would always be glimmers of musical ambition and sophistication, even in those relatively straightforward pop songs. With the benefit of 40-plus years of hindsight, a good argument can be made that Williams’ late 1960s and early ’70s songwriting is in a class with some of the best pop composers of that era, a list that includes Van Dyke Parks, Randy Newman and Harry Nilsson.

But Williams dismisses such notions; he sees himself as an unsophisticated songwriter. Still, he sees value in that characterization. “I was never sophisticated enough to be a real failure,” he says. “I think I write from the center of my chest. And when I write honestly about stuff that I feel, people relate to it. Because we’re all equipped with the same set of emotions.”