David Wilcox didn’t start his life in Western North Carolina, but once the singer-songwriter discovered the region, he knew he had found his home. Thirty-seven years and twenty-plus albums later, Asheville remains Wilcox’s home, and living here informs his music in myriad ways. In celebration of the release of The View from the Edge, his first album in four years, Wilcox played the Grey Eagle on June 3.

“In 1981, I was on a long bicycle ride the whole length of the Blue Ridge Parkway,” Wilcox recalls. “Traveling by bicycle you have to travel very light, and I missed being able to play guitar.” He asked some strangers if they could recommend a place where he could find an instrument and take part in a jam. They gave him directions to Warren Wilson College. When he cycled into the valley near Swannanoa, he knew he had found the place where he belonged. Wilcox soon transferred to Warren Wilson, staying through graduation. 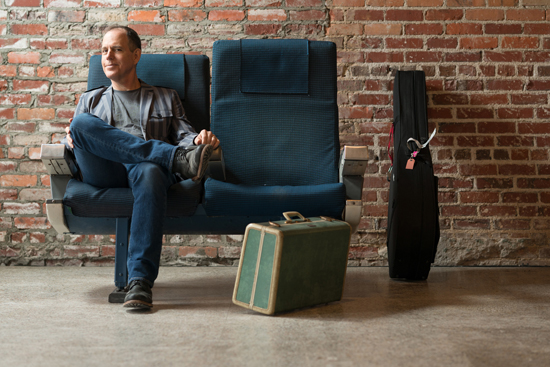 The Cleveland-born Wilcox easily acclimated to the Asheville area. His debut album, The Nightshift Watchman, was released in 1987, two years after his graduation. He landed a deal with A&M soon thereafter. And even those early recordings display the ways in which Wilcox absorbed the character of his adopted home. “Subtle aspects of your personality are brought out by different locations,” he says.

“And for me, there’s something about this land: the friendliness of these mountains. There is something about my psyche that just sort of feels at home in these hills,” Wilcox concludes. That easygoing and warm character is a foundational quality of Wilcox’s primarily acoustic-based music, and it’s on brilliant display on the 13 songs of The View from the Edge.

Wilcox was a regular performer at McDibbs in Black Mountain up until its closing in 1992. That scene “made it possible for me to be a musician,” he says. He saw and heard many other musicians come through town. “It was great to be inspired by a lot of different performers.”

Wilcox got to know and become friends with McDibbs owner David Peele. “I offered myself as a last-minute call [whenever] somebody couldn’t make it,” he recalls. “If they wanted somebody to fill in, I would run over and start playing my guitar.”

The singer-guitarist began to develop a following, and leveraged that into a plan. “McDibbs used to be open Wednesday through Saturday,” Wilcox says. “I asked David, ‘What if you opened on Tuesday, and made it super-cheap?’” His idea was to use Tuesday nights as a platform to practice onstage while further refining his performance chops.

Peele liked the idea, but didn’t care for the low-cost angle. He had a better idea. “So we made this big sign that said, ‘Unconditional Money-back Guarantee,” Wilcox recalls with a laugh. And the gambit worked: in all the time that Wilcox played those Tuesday nights at McDibbs, only one customer ever asked for a refund. And when Peele held out his hand with the cash, the customer laughed and waved him off. “I just wanted to see if you’d do it,” he told the music house owner.

Wilcox’s music would continue to flourish in the welcoming atmosphere of Western North Carolina, and his songs continue to draw some of their character from the local vibe. He compares Asheville to the so-called Music City of Nashville, Tenn.: “Here, it’s totally the opposite of a town where there’s a ‘music industry,’” he says. “You’re not here for that. You’re here to play for the people.” He says that means that the music and performance must be “more personal and accountable to the people who come.”

Wilcox says that when he’s onstage locally, he enjoys “being immersed in the energy of that particular night. I let the music be shaped by that.” He says there’s something special about playing his original music for a local audience. “When I’m done playing and I’m packing up my guitar,” he says, “I always feel like it was worth it in terms of: ‘Do I feel better about music in general? Do I feel better about what’s possible when I am brave with other humans?’

“I just get more optimistic after a good gig in Asheville,” Wilcox says.