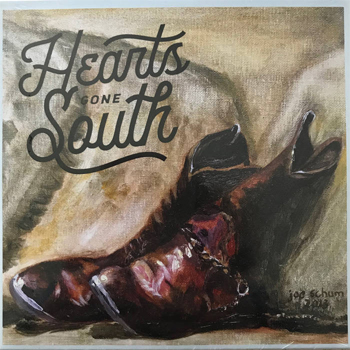 In an era filled with twanged-up, Eagles-style lite rock passing as country, it’s bracingly refreshing to encounter an album of classic country such as Hearts Gone South’s latest, Little Things. Vocalist Trish Tripp knows how to deliver a slyly humorous line with style, and the band’s sound – highlighted by the keening and exciting pedal steel guitar work of John James Tourville (also of the Delondes) – hits the sweet spot between vintage country and modern production values.

Little Things opens strong with “Low Down Dirty Man.” There’s virtually nothing in the song that hasn’t been said countless times before, and there’s nothing at all revolutionary about the familiar chord structure. Yet it’s a scorcher, full of honky tonkin’ fun and spot-on vocals and playing.

“Wheels” leans even more heavily on the pedal steel, with a dance vibe and carefree attitude not unlike kindred spirit Junior Brown. On cuts like “Wheels,” Hearts Gone South employs the clever strategy of inserting split-second references to classics of the past – sometimes a snippet of a lyric, other times a snatch of a lick placed into another context – that make the band’s original tunes sound and feel warmly familiar.

But Little Things isn’t all fun and games. “Beautiful Lie” is a melancholy mid-tempo weeper with heartfelt lyrics, and “What’s On Your Mind” is an even slower tune, a tale of heartbreak. Were it not for the crystalline, you-are-there production aesthetic, listeners could easily be convinced that the album was cut in Nashville in 1965.

“You Don’t Love Me Back” is constructed from the same musical building blocks as the other tunes on Little Things, but the Asheville-based group breathes new life into well-work lyrical tropes, demonstrating that there’s always room for new music that evokes pleasant memories of classic tunes from the past.

The slightly sinister, minor-key instrumental “Donkey Callin” is a multiple guitar workout, the kind of chestnut one might expect to hear from Los Straitjackets. But Hearts Gone South puts a fresh spin on the style, inserting a lovely fiddle solo into the song’s midsection. With due respect to Tripp and her winning vocal style, an album full of Hearts Gone South instrumental pieces would be a delight indeed.

The title track brings together sly humor and an understanding of the hard truths of modern life for a memorable number that recalls Kirsty MacColl’s forays into country and western. And no album staking a claim to the classic country label would be complete without a drinking song; “Bourbon” fills that obligation nicely.

The uptempo “You Ain’t Sleeping Here Tonight” is the musical equivalent of good-natured finger-wagging, and it sports some tasty electric guitar/pedal steel dialogue. And there’s even more instrumental goodness to be found in “You Got Me Burning.” Hearts Gone South seems to have sequenced Little Things such that the tastiest playing comes as a reward to the listener who sticks around. Luckily, the uniformly high quality of the music makes that the most effortless of tasks.

The album wraps with the twangy crying-in-your-beer “Jukebox” and the amped-up, everybody-on-the-dance-floor “Never Gonna.” The thirteen-song set contains no filler; it’s a very satisfying, traditionally-minded collection of memorable songs.