Eric Congdon Heads Into the Woods 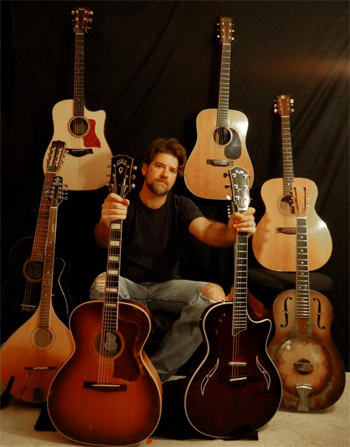 Hendersonville, N.C. guitarist Eric Congdon has been recording and releasing albums since 2006, when he made his solo record debut, Green River. Over the years, the roots-blues musician has built up a solid reputation as an sterling musical interpreter, yet one with his own style. But in 2015 he was involved in a serious automobile accident that left him unable to play guitar at all. Happily, he worked his way back to a full recovery, and that period of convalescence also yielded a new album, Into the Woods.

“I just couldn’t play straight for about two months,” Congdon recalls. He says that he tried to pick up the guitar just a few days after the accident, played a few chords and then blacked out and fell over. He didn’t understand what was wrong, so he asked his doctor. “He told me, ‘You think you’re not doing anything when you’re sitting there strumming, but your brain is working really hard to process all that. But your brain can’t process that right now.’”

So Congdon set his guitar aside while continuing his recovery. Eventually, he says his brain built up the ability to process the music. “It took me about a year to get to the point where I could play a good evening’s worth of music again, and feel comfortable,” he says.

Along with working his way back to instrumental facility, Congdon started taking long hikes in the Western North Carolina woods, reveling in the grandeur of the region. “After being laid up for a while and not being able to do anything, it was part of my recovery process,” he says. And the experience was as inspiring as it was therapeutic.

“Just being out there in nature and being influenced and inspired by North Carolina informs a lot of what you hear on Into the Woods,” Congdon says. “The stories, the sounds and the rootsy flavor of the music are all tied together.”

Some of the best songs on Congdon’s latest album would be inspired by those long walks. And the quiet contemplation and communion with nature yielded creative ideas he would explore once he got home and began to write songs. One of those is “The Legend of Blowing Rock.” Congdon says that he “wrote out a story lyrically first, and then made the music to match up with the words.”

But other tunes, like “Smoky Mountain Medicine Man,” are a combination of new and older, previously-unused works. “I actually wrote the music for that song almost 10 years ago,” Congdon says. Then on one of his hikes, he had a moment of inspiration. “That phrase jumped into my head – Smoky Mountain medicine man – and then pretty much on the spot, I scribbled down the lyrics and finally completed the song,” he says.

Several of the tracks on Into the Woods are stories about real people. “Ballad of Brando” is one such song. “That’s a childhood friend, and those are real things that happened to him,” Congdon says. His goal for the album was to create a unified collection of original songs. “I had some stories I wanted to tell,” he says. “When people hear the CD, I want them to think of North Carolina, and the woods, and the things around here. That’s what I was shooting for.”

Remarkably, considering the richly evocative lyrics of Into the Woods, the new album is the first in nearly a decade to feature Congdon’s vocals. “For a long time, I felt I didn’t have anything to say lyrically, so I focused on music,” he says. But then after the accident, he found that his lyrical muse had returned. “And they kind of tied together,” Congdon says. “It just happened naturally.”

Another goal Congdon kept in mind when making Into the Woods was making it a “performance album,” one that could be duplicated onstage. “When people come to see me live, I want to give them a pretty reasonable facsimile of what’s on the CD,” he says. His guiding principle in making albums is straightforward: keep it simple. But that doesn’t mean rushing things. “It took a while to complete, and I really sweated over the details,” Congdon says.

“I have my little humble recording studio here at home, and I pretty much assembled everything here. Into the Woods is personal in its own way,” Congdon says. “I have a lot of my heart and soul in it.”