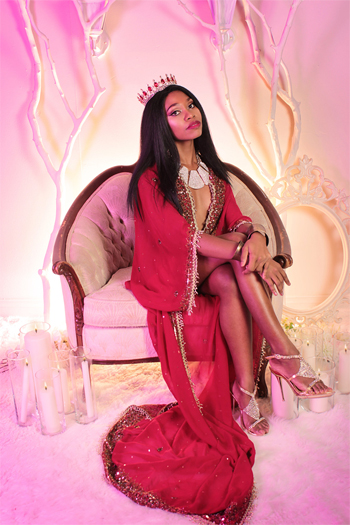 Burlesque has a long and storied history, but for many years it has existed on the fringes of the arts and entertainment world. But thanks to the efforts of dedicated practitioners, the often risqué art form – encompassing dance, comedy, political commentary, magic and other elements – is experiencing a renaissance. Asheville is at the forefront of burlesque’s modern-day resurgence, and the 12th annual ABS Fest: the Americana Burlesque & Sideshow Festival (held this year May 25 and 27 at the Grey Eagle, May 26 at the Orange Peel plus Saturday workshops) is the most high-profile local example of renewed interest in burlesque.

Burlesque’s racy reputation leads some to miss its empowering qualities. “Asheville’s burlesque boom has been explicitly feminist from the start,” says event organizer Lauren “Madame Onça” O’Leary. She notes that burlesque focuses on “body-positivity and ideals of empowerment, visibility, history and social justice.”

“Asheville was ahead of the wave of this festival-in-every-town movement,” O’Leary says. “When ABSfest started, there were few [burlesque] festivals in the world. Now they’re spread though the West and beyond, with festivals in Iceland, Amsterdam, Italy and more.”

“Instead of collapsing inward from the pressure, burlesque and sideshow acts have set out to make different rules,” O’Leary says. Those new rules re-frame the too-this-or-that characteristics as assets, “things to share with confidence.” She notes that burlesque empowers and encourages “people of all genders, ethnicities and body types” to participate. “We work hard to get them all up onstage.”

“And,” she emphasizes, “Asheville loves the weird stuff.” And the ABS Fest leans decidedly in that direction: the event showcases nearly three dozen performers, and this year’s headliners include magician and storyteller David London and sideshow performer Alex Doll and Oregon Burlesque Fest “Keepin’ it Weird” award winner Natasha Riot.

May Hemmer – known professionally as “Cocoa Barbie” – tops the bill at this year’s ABS Fest. She embraces the nickname bestowed upon her by fellow burlesque dancer Vita Devoid. Hemmer points out she is one of relatively few performers of color (her ancestry is African American, Puerto Rican and Cherokee) in burlesque.

Though she began her career as a burlesque performer in New Orleans after graduating from college, Hemmer recently moved back to her home state of North Carolina. She works less frequently now than she did in New Orleans, but as a wife and mother, Hemmer appreciates the ability to be more selective about choosing gigs.

Hemmer has a background in dance, specifically in ballet and jazz, but prior to launching her burlesque career in 2000, she worked in the corporate world. “I was in banking; I was the only female in my department,” she says. Working in burlesque gives her more self-determination. Hemmer’s lavish performances often begin with her garbed in a lavish and elaborate gown, and end with her wearing little more than a pair of pasties. “But I’m in control,” she says. “I dictate what I want to do. You might not get to see anything that’s underneath my gown, or feathers, or whatever.”

That empowerment is key to a performer like Hemmer, herself a victim of domestic violence many years ago. She says that dance allows her to convey ideas “that I can’t express in words.” she admits that oing so takes a lot out of her emotionally. “I’m sometimes a crying mess when I get offstage,” she says. But I can bare myself to people because I do so in the manner that I see fit. It’s freeing and liberating: I’m female, and if I want to take my clothes off, I will.”

Hemmer provides an idea of what the audience can expect from her shows. On Saturday, she’ll begin costumed in a 1920s-styled dress. “It’s a homage to a historical figure, Stephanie St. Clair. She was the first African American bookie in Harlem,” Hemmer says. St. Clair used some of the profits from her numbers running to help her community and to fight against police brutality; Hemmer’s routine earned her the Miss Montreal Burlesque title in 2017.

May Hemmer’s Sunday performance couldn’t be any more different. She’ll present an example of nerdy burlesque. “With my Princess Tiana number,” she explains with a laugh, “I’ll ruin your Disney childhood!”

“Expect the unexpected,” Hemmer says. “It’s not about taking your clothes off as fast as you humanly can; It’s the tease of it.”

Burlesque is “fun, funny, irreverent and sexy,” says O’Leary. “It’s a form of activism that can engage people from many walks of life, and on many levels.” She says that the performers focus on presenting material that’s relevant to them. “We explore everything from sexuality and circus skills, the #MeToo movement and the right to decide which bathroom is right for us.”

Burlesque is “an art form largely by and for women who want to see and do something new,” O’ Leary says. “And everyone else is invited to enjoy the ride.”