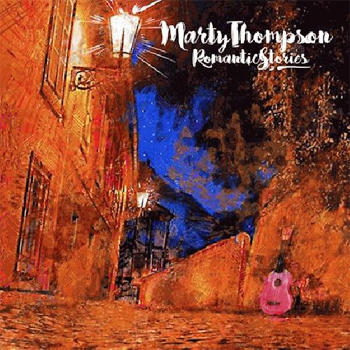 In 2018, every album release has to have an angle, it seems. The unique selling proposition for Romantic Stories is that Thompson wrote all of its songs ion a ukulele. A pink one, in fact. Fascinating, no? Me neither.

Let’s ignore that and focus on the music itself, which is decidedly not played on a uke. “A Thud” is loping, midtempo rock/pop, with hints of country and even zydeco. A catchy enough tune, it’s marred by a tinny mix that—unintentionally, I think—makes the song sound as if it’s coming out of an AM transistor radio.

The rest of the album rocks a bit more and doesn’t suffer from the first cut’s production shortcomings. Thompson has a pleasant voice, and the guitar riffs around which his songs are built are sturdy ones. The drumming on the album is competent—really, there’s not a thing wrong with it—but the feel is very stiff, as if it’s played by either a machine or a session drummer who’s solid and professional but unfamiliar with the material.

The album improves as one digs into it, though. “In the Monk’s Garden” has subtle hints of southern rock. Thompson sometimes seems to write vocal melodies that push his capabilities to their limit, but there’s nothing here to offend the ear. “Anymore” has an odd feel; it’s difficult to sort out exactly what kind of a vibe the artist is going for here: it sounds a bit like “Touch of Grey” era Grateful Dead with a slightly clunky melody.

But Thompson scores major points for his commitment to variety: too many albums are little more than a collection of multiple versions of the same basic musical idea. Romantic Stories is quite varied.

In fact, that’s the album’s overriding virtue. Even if one doesn’t enjoy a given tune, further investigation is sure to turn up another very different one more to one’s liking.