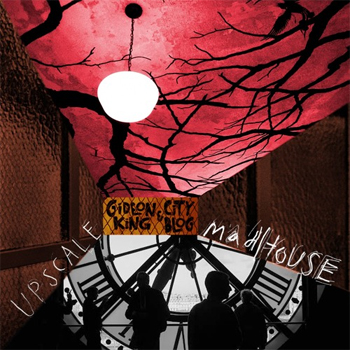 Sophisticated, jazzy pop is the order of the day on Upscale Madhouse, the latest album from Gideon King & City Blog. With a sound that instrumentally recalls Steely Dan, King’s group leans a bit more in a jazz direction. The vocals are silky-smooth, almost veering into yacht-rock territory. Fans of Hall & Oates with a predilection for the more urbane end of that duo’s catalog may enjoy this.

There’s a slick, uptown New York City vibe to the songs, and one suspects that the melodies are more important than the lyrics. That supposition is supported by the album’s opener and title track, a tune that features wordless ba-ba vocalizations in place of a standard chorus.

There’s an exacting approach to the arrangements on these ten songs; not quite bloodless or fussy, there’s just enough frayed edges to maintain the feeling that actual humans play and sing this material. The press kit quotes King explaining that the album is a collection of vignettes of NYC life. That may be true of the lyrics, but the gleaming polish of the songs stands in stark contrast to that. Not a note is out of place, and one suspects that the superb musicians who play ion these sessions would use sheet music when playing life, making certain it sounds exactly the same. There’s a certain value and virtue in that approach, but those who enjoy a bit of grit in their music—the kind of grit that the song purport to convey lyrically—may not find it here.

Everyone else—and that includes fans of impeccable musicianship—can ignore all that and enjoy the tunes as they float effortlessly by.