Graham Parker: Sticking to It (Part 1)

When Graham Parker came on the music scene in the mid 1970s, he was pegged as an angry young man of the new wave movement. And while that label always overstated the case, there was an acerbic and barbed quality to both Parker’s lyrics and his manner of delivery. Still, at his best Parker created r&b-flavored songs that were equal parts word-pictures and memorable, sharp melodies.

And from the start, London-born Parker developed a reputation as a compelling live performer, one of those about whom many would remark, “Sure, his records are good, but you’ve really got to see him live.” A tacit acceptance of that reality – that the studio can’t always fully capture the true essence of the man and his music – may be part of the reason that to date, there have been nearly as many live Graham Parker albums as studio releases. 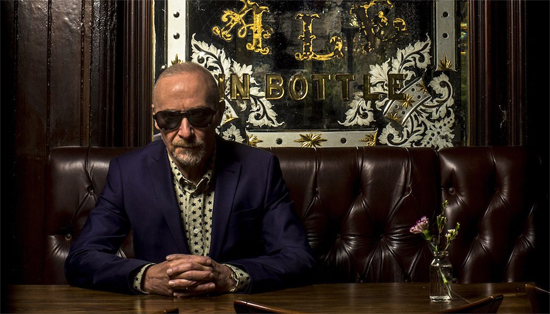 Parker’s debut album was 1976’s Howlin’ Wind, credited to him and his always-excellent band, The Rumour. Heat Treatment followed later that same year, with Stick to Me in 1977 and his most commercially successful release to that point, Squeezing Out Sparks, landing on record store shelves in 1979. In that same period, Parker’s label released an EP (The Pink Parker) that included two live tracks, and a live album, 1978’s The Parkerilla.

He notes that the EP and The Parkerilla were done in the spirit of what he liked about the music he grew up with. “I remember that in the 60s in England, a lot of those sort of four-song batches came out from the Beatles and the Stones. The cover versions were on EPs with picture sleeves, and they were very alluring for a kid because you could get your parents to pay for them more easily than you could for a whole album.

“And they were just marvelous things,” he says. The Pink Parker “was an example of me doing the same thing, and the same with the live album. Because, let’s face it: I heard Get Yer Ya-Ya’s Out and Rock and Roll Animal by Lou Reed before my career started, so that seemed to me to be a logical thing to do.” He acknowledges that he and the Rumour “were so well known as a live band – and we did so much touring – that it was just an obvious choice.”

Parker thinks that live albums help capture the excitement of a successful tour. “You can’t help but think, ‘Wow. That was a good one tonight. If only we’d been recording it.’ And then maybe the opportunity comes up further down in the tour, or you talk to the tour manager and say, ‘Can we get someone to record this?’ There’s really no deeper thinking about it than that.”

Parker chuckles when it’s pointed out that there are more than 20 live albums credited either to him solo or with The Rumour; two of those are six-CD box sets. “I guess there’s quite a lot of them out there by me by now,” he says. “I haven’t really counted. I know the official studio albums are getting up around 25, soon to be 26, I suppose. And yeah, I guess there are quite a lot of live works as well, which is good for the fans. They like that.”

Variety has been a hallmark of Parker’s long and winding career, as well. He’s performed and recorded variously with the Rumour, with two other bands (the short-lived group The Shot and The Figgs), and as part of a duo. His deep catalog offers myriad choices of material for live shows, but he acknowledges that some songs are more suited to one approach than another.

“I think there are some songs that are pretty rip-roaring with a band, and that’s probably the way to do them,” he says. “But it’s surprising how over the years I’ve looked at a song and thought about doing it solo, then thought, ‘No, no, no. That needs a band,’ and then I’ve found a way of doing it that suddenly gives the song a whole new life.”

Sometimes that means changing a song from the way it was recorded for an album. “It usually means a different tempo. It might mean a different arrangement.” But some songs only deserve to be done one specific way, he says. “If you take a song from Howlin’ Wind, like ‘Between You and Me,’ it works very fine solo,” he says. “And it has never worked with a band.”

The song’s sweet and romantic – but heartfelt and authentic – feel never lent itself to a band reading, Parker says. “It didn’t suit what we were doing back in the day. We weren’t geared for sweet. We were geared for extremely violent: We were geared up for punching people in the chest,” he says with a laugh.

The Rumour has taken on some of Parker’s slower material, but they deliver it in seething fashion. On the band’s 21st century reunion tour, they played “Watch the Moon Come Down” from the Nick Lowe-produced Stick to Me LP. “It was epic,” Parker says.”We were even doing ‘Black Honey’ from Heat Treatment for one of the tours.” He uses the word epic again, explaining. “That’s only because we know how to do a song now, instead of a full frontal assault. And that has helped improve those kind of balanced songs. And for solo or duo shows, they just work beautifully. There’s a lot of different ways to skin the cat, as it were.”