Tank and the Bangas: Big Bang

One of the most intriguing and compelling musical acts to gain recent national attention is Tank and the Bangas. The New Orleans-based group combines spoken word, hip-hop, gospel and other styles into a unique sound all its own. Tank and the Bangas won the prestigious Tiny Desk Contest in 2017, and the group is currently on tour.

Slam poet Tarriona “Tank” Ball started the group in 2011, and by 2013 Tank and the Bangas had released a debut album, Thinktank. Ball’s approach of alternating sections of spoken word, freestyle rap and spirited vocals earned the group a strong following in New Orleans and beyond. But the group’s unique and defined sound isn’t the product of some carefully thought-out plan. 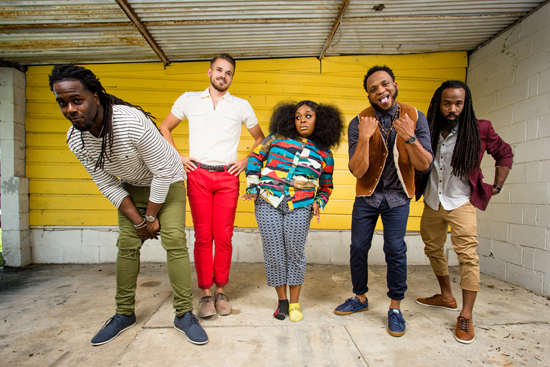 “When I stared with the band, we were still in the midst of finding our sound,” says keyboardist Merell Burkett. “It’s hard to pinpoint when – or even how – it became what it is today.” He believes it’s simply the product of the band members’ backgrounds, and a commitment to allowing all members to contribute with no thought of genre. “It’s not like we have to mash every influence in every single song,” he says. “We do what organically feels good to us; that’s what makes it our sound.”

Though Thinktank earned enthusiastic reviews, the group is best appreciated in the context of a live performance. Tank and the Bangas implicitly acknowledge that reality: to date the group has released three live sets: The Big Bang Theory: Live at Gasa Gasa came out a year after the studio debut; there’s also a live EP (Jam in the Van), and the vinyl Live Vibes was released on Record Store Day 2018.

Burkett emphasizes that the string of live releases doesn’t signal difficulty crafting a studio album. He explains the multiple live releases as “a demand thing. People come to our show and enjoy it, so they want to take a piece of that home with them.” Burkett points out that each show is different from the next, so each live release – even if it shares some of the same songs – is unique. “And Big Bang Theory is uptempo; Live Vibes is more intimate.”

The band recently released a new single, “Smoke.Neflix.Chill.” And a studio release is planned for later this year. “We have something cooking in the oven, something in the works,” Burkett promises.

Burkett describes Tank and the Bangas’ onstage demeanor as “organized chaos.” The band can take off on improvisational journeys, but it never loses the plot or descends into aimless jamming. The group’s live shows are boisterous and exciting, and Tarriona Ball’s lyrics connect with the crowd. “I think the excitement makes people more attentive to what’s being said,” Burkett says. “And we like to break down the music to compliment what’s being said when Tank gets deep in those poems.”

Sometimes, Burkett says, “we just let Tank do her thing and we follow her. Kind of like church!”

In fact, church creates a common bond among the band members. “Every last one of us grew up in church,” Burkett says. “My grandparents were choir members; we had to go every Sunday.” Bassist Norman Spence’s father is a pastor, as is Ball’s grandfather. “I think [drummer] Josh Johnson’s dad is a preacher too,” Burkett says. “And Albert [Allenback, alto saxophone] used to play at church with Norman.”

The group is currently touring as a five-piece, but membership sometimes swells to twice that size. And Burkett says that Tank and the Bangas feels more like a family than a band. “They’re like my brothers and sisters,” he says. “I couldn’t have chosen any better group to be a part of.” He says that he treasures “creating music with my friends. We’ll start something from scratch, and then the outcome is just crazy every time. I’m blessed to have them in my life.”

With awards, successful albums, a tour and a new release on the way, Tank and the Bangas have a solid foundation to take the group into the future. And Burkett already has his sights set on another achievement: a Grammy Award. With a smile, he asks, “Is that reaching too high?”