On the group’s second album, Brooklyn-based Karikatura worked hard to capture the energy of the band’s high-energy live shows. But Ghost Light isn’t a document of the group’s stage performance. In fact, it’s the other way around.

Karikatura’s dance-ready sound draws from punk, reggae, Afro-Cuban music and other styles.“We’re very active onstage,” says leader and guitarist Dima Kay. “We do a lot of improvisation, and a lot of that is reacting to the audience.” 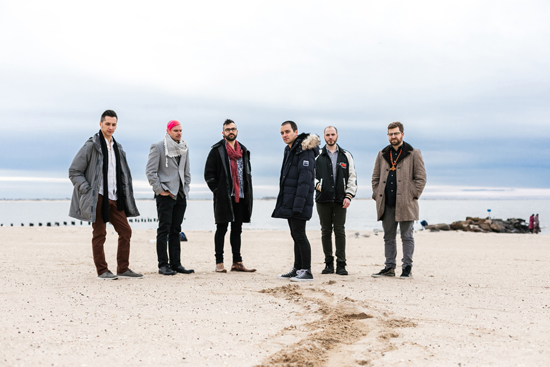 Of course there’s no audience in the recording studio, so the band sought to conjure that vibe in other ways. “I’m an engineer and a producer, and I have my own studio,” Kay says. “So we’re always recording.” But to make Ghost Light, the heavy-gigging band took some time off of the road. “We really reflected on all the traveling we’d done, and that allowed us to focus on the emotions and feelings in the songs.”

In the past, Karikatura road-tested its songs, developing and polishing them in front of an audience. Then they’d go into the studio, where they would more or less press “record” and play. “This time we made a point not to do that,” Kay says. “Because live, you form certain habits in how you play. And I wanted us to be more open.” That meant creating the songs in the studio, maintaining spontaneity.

“We used to be a band that played live and the road and then re-created that in the studio,” Kay says. “Now we’re more focused on songwriting; we use the studio as a creative outlet.”

That method of creation meant that once the sessions were done, the six band members had to learn how to play the songs live. “And the songs never stop changing,” Kay says. Sometimes a 3-minute song becomes a 10-minute song live, as the band members ask themselves, “How can we interact with the audience here?” Kay says that keeps things exciting for band and audience.

“I don’t even know what the next record’s going to be like,” Kay admits. “Our main thing is that we don’t want to ever make the same album again and again.”