The annual Music Video Asheville competition has grown from humble beginnings 11 years ago to its current status as a high-profile event attracting top-flight talent. But even as the competition earns more recognition for the filmmakers and musical artists who take part, organizers make a point of keeping that which makes it special: developing connections among local artists. The 11th annual Music Video Asheville Awards took place April 25 at the Diana Wortham Theater.

Music Video Asheville was started in 2008 by Jenny Fares as a way to encourage local talent to pursue their creativity using the medium of music videos; the popular Brown Bag Songwriting Competition was another of Fares’ initiatives. But after five years running MVA, Fares was ready for new challenges. The logistics involved with Music Video Asheville were “becoming a little overwhelming,” suggests Kelly Denson. “I think she was feeling that it was time to pass the baton.” Denson had attended the fifth MVA in 2012, where she met and became friends with Fares. “I kind of had this moment: ‘I’ll do it!’” she recalls with a laugh. “I had no idea what I was getting myself into!” 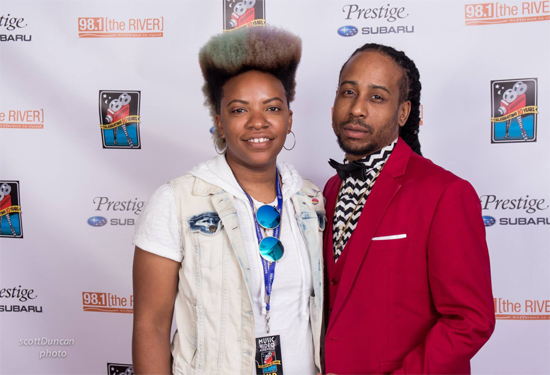 Working with Jason “G” Guadagnino, Denson endeavored to expand Music Video Asheville. She says that after one more year hosting the event at Cinnebarre in the space then known as Biltmore Square Mall, “we quickly outgrew that.” They moved the awards ceremony downtown to the Fine Arts Theatre. “And then Jason had this idea: ‘We should add a red carpet!’”

That idea was originally a playful, silly one, Denson admits. “But it became something that we’ve polished, and we were even featured in USA Today last year.” She and Jason G worked to improve all areas of the competition and ceremony. And Denson proudly notes that “Music Video Asheville is starting to make some waves in the music and film scene.”

This year’s event featured 85 submissions. Denson reflects on the defining characteristics of the event. “Music Video Asheville is about trusting the artists around you,” she says. “I’m an event planner; I’m not the traditional ‘creative.’ But I love to work with creatives, and I”m inspired by them. And to watch them exceed my expectations – repeatedly, every single year – is so exciting.”

Denson says that every year, someone involved in planning will come up with a “weird, crazy idea. And then they take it and make it something great. That collaboration is the beauty of living in a creative community like Asheville,” she says. “At Music Video Asheville, you’ve got filmmakers, musicians and artists – people who typically don’t get to be in the same room at the same time – all coming together.”

Many technological changes have taken place since MVA’s early years. Denson notes that access to high-quality audiovisual equipment is much more affordable now. “So the overall quality of submissions has increased exponentially,” she says.

One specific and ongoing goal of Music Video Asheville is to make the competition as inclusive as possible. “We make a concerted effort to reach out to communities, people and musical styles that haven’t been [fully] represented,” Denson says. “And I realize it’s not just something that’s gonna land in my lap; I have to do it with intention.”

Denson is proud of Music Video Asheville’s part in shining a light on local talent, but she’s careful not to take more credit that she thinks is deserved. She sees MVA’s biggest success in the connections that creatives make with one another. “Music Video Asheville is a spotlight place where other people can see what these artists are about and who they are. I think that for both filmmakers and musicians, it’s a great platform.” And the event exposes audiences to the work of more than two dozen musical artists. “Where else can you do that in three hours?” Denson asks.

Kelly Denson mentions filmmaker Kira Bursky as an exemplar of the kind of talent showcased at MVA. Bursky’s video for Ian Ridenhour’s “Dancing Children” tied for first place in the 2017 competition, and her film for VIA’s “We Are the People” won the Best Visual Design award that year. Bursky has won top prizes in at least five other national-level competitions as well.

“All films are collaborative,” Bursky says. “Every perspective, every hand and eye and ear that graces the creative process leaves its mark.” This year she’s pleased to have entered two videos in the competition. “Music Video Asheville is fueling the growth of artistic collaborations and partnerships,” she says.

“Occasionally I hear people say, ‘Music videos are dead,’” Denson says. “No. Music videos are alive and well, and stronger than they’ve ever been.” Stressing that creativity and storytelling are the key ingredients to success, she says, “Never underestimate the power of a music video.”