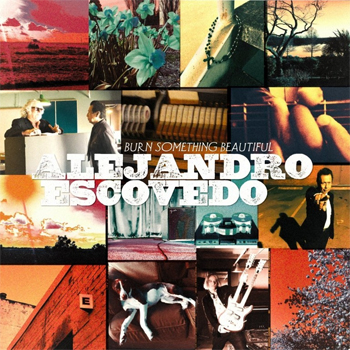 Guitarist, singer and songwriter Alejandro Escovedo released his 14th album, Burn Something Beautful, in late 2016. Reaction to the album—in many ways a return to the rocking end of Escovedo’s musical spectrum—has been so positive that he’s still on the road in support of it. The album distills his interests and influences into a cohesive whole, and stands up against his best work as a solo artist, with the Nils and even his acclaimed 1980s roots-rocking band, Rank and File.

Escovedo’s musically very much his own man, but he’s unashamed to cite his influences, and to recognize the effect those artists have had upon his work. “My record collection is so varied, everything from African music to Sun Ra to Latin music to the Stooges,” he says. “But my heart really belongs to the storytellers.” He names Townes Van Zandt, Leonard Cohen, Lou Reed and Ian Hunter as favorites.

“And David Bowie,” he quickly adds. “Bowie was a great inspiration for exploration, for seeking other things and never really being satisfied. I think I’ve always wanted more out of the music and out of the different styles that I use.” Though it’s not intentional, Escovedo’s music—like the work of David Bowie—doesn’t fit neatly into a single genre category. “I’ve never set out to write a blues album or a jazz album or anything like that,” he says. “I’ve always loved different elements in one song.”

And while Escovedo’s recent collaborations with Chuck Prophet (and frequent David Bowie producer Tony Visconti) yielded some top-flight albums, for Burn Something Beautiful, Texas-born Escovedo chose to work with a new team. That collective includes Scott McCaughey (Minus 5, Young Fresh Fellows) and Peter Buck (R.E.M.), both musicians firmly rooted in the Pacific Northwest.

Escovedo believes that he couldn’t have made a record like Burn Something Beautiful anywhere else. He cites a kind of distorted “fuzziness” that’s been a defining characteristic of music from Seattle, Portland and the region long before the grunge scene of the 1980s and ’90s. “It goes back to the Wailers, the Sonics and Paul Revere and the Raiders,” Escovedo says. “And all the punk rock bands that came out of there were really great.” All of those elements are in the album’s songs, he says, which were co-written with Buck and McCaughey.

“I feel like we really got a ‘band’ feel and vibe to the whole record,” Escovedo says. “Scott plays a lot of different things, and Pete plays a lot of different types of guitars and mandolins and whatnot. Together, they work very well.” He says that having McCaughey and Buck as producers “took me somewhere I hadn’t been before.” A year after its release, Escovedo says he’s “still in love with the record.”

Alejandro Escovedo’s music has always been about more than the sound; his thoughtful lyrics are a central component to all of his work. And there’s often a socio-political dimension to his writing. He famously stopped performing his song “Castanets” (from 2001’s A Man Under the Influence) when ex-president George W. Bush revealed that he liked the song.

He has similar issues with the current occupant of the White House, a man he views as hostile to the immigrant experience and multiculturalism. Escovedo is proud of his heritage; he wrote music for a play called By the Hand of the Father, chronicling the journey of five men across the border and their subsequent efforts to support their families once settled in the United States. Escovedo says he’d like to revive that 2000 play because of its renewed relevance to current events.

Escovedo has amassed a formidable body of work, and fought his way back from a serious illness in the early 2000s. Yet despite his successes, he says he’s never felt that he’s “made it” in the conventional sense. Still, he does have some fond memories that come close. He recalls when his early 1980s band True Believers played at L.A.’s Club Lingerie. “Our record had just come out,” he says. “We were playing some Stooges song—maybe ‘I Wanna Be Your Dog’—and Iggy [Pop] was in the audience, dancing to our music! But I’ve never felt like I ‘made it.’ There are still things to do.”