Jean-Michel Jarre on Making the Most of Music Technology

Jean-Michel Jarre built his music reputation on the strength of a series of groundbreaking 1970s albums. His second release, 1977’s Oxygène pioneered the use of analog synthesizers in a melodic context, and is widely viewed as an enduring influence upon today’s electronica artists. But Jarre remains busy with music today, and his approach isn’t stuck in the past, wedded to old-fashioned methods like recording on magnetic tape. Today Jarre is an enthusiastic proponent of the digital music revolution.

“The first digital way of recording was like the gramophone,” he says, calling the 1980s the “dark ages of digital.” But he believes that music technology has come a long way since then. “For the last six or seven years now, the digital process can compete with the analog way. It’s true for movies, and it’s true for music.” Putting his belief into practice, Jarre created Oxygène 3, a follow-up to his 1970s release, using the most modern methods possible. 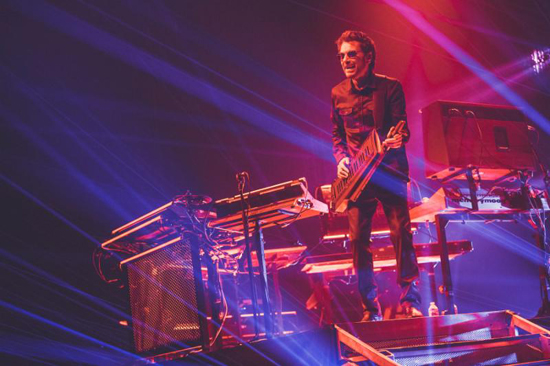 “Obviously the instruments are a bit different” on this new release, Jarre admits. “The idea behind Oxygene 3 was to be faithful to the concept, but also having this minimalist approach by choosing instruments as if I was 35 and doing Oxygene for the first time.” In practical terms, that means using some physical synthesizer keyboards, but also making full use of “plug-ins,” computer-based software programs that model the sound and versatility of “real” synthesizers.

The French composer is 69, with a career that stretches across five decades, offering him a broad perspective on the changes he has witnessed. And he believes that digital innovations have been a force for good in music. “I think it’s great that you can democratize the way of producing, recording and even distributing music these days,” Jarre says. He creates new works even while traveling, using platforms like Ableton Live, a computer-based production, creation and performance tool.

“I was traveling with my Ableton Live all over the planet,” Jarre says, “recording here and there and in a very easy way. Even if it took me five years recording for this quite massive project, it was not due to the equipment; it was more due to the project itself.” Jarre scoffs at the notion that file sharing for collaborative projects like his two-volume Electronica releases means that something is lost in the process. In fact he traveled the world for that project, physically meeting with each of his collaborators. Jarre worked side by side with Massive Attack, Pet Shop Boys, The Who’s Pete Townshend, Hans Zimmer, Moby and many others.

“Electronica was based on two principles,” Jarre explains. “The first one is sharing the creative process physically together with the collaborator.” The second was to create the basis of a track on his own ahead of time, “a demo in function of the preconceived ideas I had regarding the artists I wanted to collaborate with.” He notes that those ideas might not necessarily line up with the artists’ own ideas. “But everybody said yes,” he says with a laugh.

Jarre emphasizes that while he makes full use of modern technological advancements, he’s not a slave to that technology. “I’ve always been interested in using – and, in a sense, hijacking – audio and visual technology for my performances,” he says. Early on in his career he decided that visuals were a critical component of performance. And he believes it’s even more important today. “You can listen to music everywhere these days,” Jarre says. “The challenge is to be able to offer a visual complement aspect to the music you’re playing on stage.” His current tour successfully puts that philosophy into practice; he describes his current shows as an example of “3-D without glasses.”

The show’s visuals are based on multiple layers of screens with complex computer animation, immersing the audience in images along with sound. “To tell you the truth, I was scared to death that it wouldn’t work,” Jarre admits. But it did; an initial run of dates in Summer 2017 quickly led to the current North American tour. “ The production is very complex to put together,” he says, “so we chose the arenas quite carefully to be able to present it.”