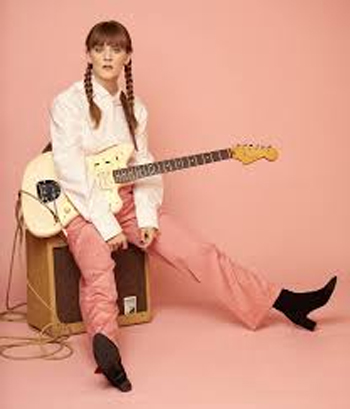 When you finish a recording session, do you feel like you’re able to say that it’s done, or are you the sort of person who wants to go back and tinker with it?

“It’s definitely a process. It’s different every time. Zach Dyke produces my stuff, and when we finished the week recording the skeletal version of the songs, there was definitely a lot that we ended up going back to, adding things in and moving arrangements around. But mostly, [finishing a session] feels like a huge accomplishment. And there was definitely a part of me that felt very relieved after we were done with the main part of recording Fine But Dying.”

For someone who is a songwriter first, fronting a band instead of playing solo is a conscious choice. What is it about the character of an electric rock band that suits your songs better than, say, just your voice and an acoustic guitar?

Beyond the lyrical themes, how did you approach to making Fine But Dying differently than your previous albums?

“When we were [recording the new album], I approached it thinking of playing it live. For the first time I was like, ‘Oh, my gosh. This is a show I would really wanna go to. This is energetic, and it’s interesting.’ I felt like I was creating something that I would get to live in, in a way that I didn’t necessarily think I could before.”

Do your songs grow and change, or do you pretty much develop a style and arrangement for each one and then run with it?

“They totally grow. I would get bored if we were playing the exact same thing every time.We’ll go a few months touring something, and then I listen back to the recording of the song, and it’s just wild how much it has grown [in live perormance]. And I don’t even think it’s a conscious thing, like, ‘Let’s change things to make it live.’ The songs just naturally seem to grow and evolve when you’re experiencing them every night.”

Some artists say that they feel a responsibility to reveal their innermost thoughts, or to be entertaining onstage. Does anything like that inform your relationship with your fan base?

“It’s important for me to really own this thing that I’m doing, so that people can realize that they can also do their thing. So, me being fully present in my body and in the art I’m creating ends up being my responsibility to other people.”

With regard to music, what’s the best piece of advice you’ve ever received?

“’Don’t perform for anyone except for yourself.’ Just do your absolute best thing, and don’t think about trying to outdo anyone. I learned really early that competition is incredibly toxic, and I think I’ve never really made any room — in anything I’m doing professionally — for that spirit of competition. I just don’t like that; I’m not a competitive person. It’s about owning my side of things. Owning the thing I’m doing and really championing everyone around me, because if one of us succeeds, we all do. There’s no point in being territorial over space, because we all deserve space.

“There wasn’t someone specifically who told me that, but just over the course of growing up and being in a music community, that was just the thing that I took away from all the conversations I would have among people. I was like, ‘This is the key to remaining sane, and good, and remaining kind to people and kind to yourself.’”

“Everything, you know? I couldn’t imagine not doing it. [Making music] feels like the best way I could be utilizing my body, and my voice, and my space. I was doing anything else, I don’t know if I would be here. So it’s kind of saved my life, in a sense.”

You have tour dates through early May, plus two summer festivals. Right now the dates are all in support of the new album. What’s next for you after that?

“I hope that we keep touring this record for a while. I’ve really enjoyed how it’s felt to live inside of this album live. I think we’ll be doing some support dates in the fall, and we’ll definitely be going over to the UK and Europe and doing Fine But Dying gigs over there.

To the extent that you can tell this early on, do those songs have a character similar to the material on the current album, or are they going in yet a different direction?

“Yes to both of those things. Fine But Dying gave me a certain permission to exist in a certain way that was really freeing. So naturally, and compared to my older stuff, the songs that are coming out are a lot freer. I want to figure out what other space I can take up that I, right now, maybe think I can’t. It’s definitely been an experiment of sonic ability, and lyric ability, and of just figuring out the ways that I can grow and be strong in this new space.”