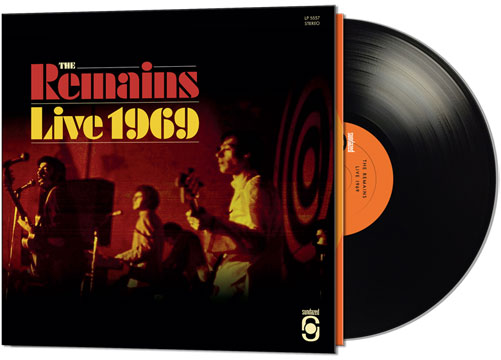 The Remains were one of the coolest and most promising r&b-flavored American rock bands of the 1960s. The Boston-based group scored the supreme honor of opening for the Beatles on their final U.S. Tour. And the Remains would be immortalized by inclusion on Lenny Kaye’s incalculably influential garage rock compilation, Nuggets.

What the Remains never quite did manage was to release a proper album. They were “big in Boston,” as the saying goes, but they never broke out nationally, and despite the presence of an excellent songwriter in guitarist Barry Tashian, most of what they would leave behind recording-wise were cover versions (albeit very good ones).

Fast forward to present day. Tashian recently made a stunning discover in his personal archives: an excellent quality live concert recording of the Remains. No, it’s not from their opening slot for the Beatles. And in fact it’s not even a recording from the band’s original run. This tape is a document of a reunion gig at the fabled Boston Tea Party on March 16, 1969. And though original drummer Chip Damiani had left right before the ’66 Beatles tour (to be replaced by N.D. [Norman] Smart, later of Mountain and Hello People), he was back behind the drum throne for the reunion.

Perhaps disappointingly, the recording kicks off with a song rock fans have long since tired of” the McCoys’ “Hang On Sloopy.” But in fairness to the Remains, they tear into it with relish, emphasizing the rhythm and blues potential buried within the song. Their reading of “Route 66” is reminiscent of the Rolling Stones’ version (the Stones were a key influence on the band’s sound).

The band’s cover of the Kinks’ “All Day and All of the Night” is quite punky, and keyboardist Bill Briggs’ electric piano is wonderfully nasty, playing the role of rhythm guitar. Tashian simply rips it up on a relatively lengthy lead guitar solo. Bob Dylan’s “Like a Rolling Stone” is pretty good as well, though despite the Remains’ spirited playing and singing, it’s not remarkably different form every other cover of the song you’ve heard.

But things get wild. The very best (by far) songs the Remains ever did were “Don’t Look Back” (written by a young Billy Vera) and “Why Do I Cry.” The latter is here in all its r&b fury, sounding not unlike the Stooges with an electric piano. In fact the Detroit band featuring one Iggy Pop is as good a musical guide for the aesthetic on display for this entire set: exceedingly raw, full of energy and rocking as hell.

In many ways, “Why Do I Cry” is the high point of Live 1969. The rest of the set s mostly familiar material, though it’s played with unmatched fervor. The Remains pile-drive their way through a supersonic (and delightfully ragged) reading of Chuck Berry’s “Johnny B. Goode,” and head straight into a blues number, Muddy Waters’ “She’s Nineteen Years Old. With the pace slowed waaaay down for the blues, the energy flags a bit, but the Remains play the tune in sinister fashion, extending it to nearly six minutes.

“Tell ya what: we’ll just do something else altogether,” Tashian tells the crowd. That something else is Ritchie Valens’ “La Bamba” (with pretty fine Spanish vocals), sliding right into a malevolent and delightfully bum-note filled Rolling Stones cover, “Empty Heart.” The band wraps up with a track off their ill-fated album (released after they broke up, “Diddy Wah Diddy.” In the Boston group’s hands the tune sounds not a bit like Captain Beefheart’s version; instead, it – once again – calls to mind the Stooges. And what’s not to love about that?

Nobody knew this tape existed until recently. It existence proves something that was always said about the Remains, both by fans and Tashian himself: the band’s studio recordings barely hinted at the Remains’ intensity. So here it is, in all its ragged glory. Fittingly enough, the album is available from the folks at Sundazed Records, on good old fashioned vinyl.

You may also enjoy: my wide-ranging interview with The Remains’ Barry Tashian, from 2010.