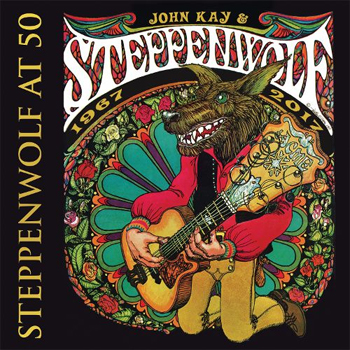 There have been countless Steppenwolf collections. I count more than a dozen best-of’s and similarly-themed compilations. And during the group’s heyday – its years on Dunhill Records – Steppenwolf released seven albums of new material. So perhaps the news of yet another Steppenwolf collection in 2018 – a three-disc set no less! – might initially be greeted with a yawn or shrug.

And if you learn that the material on Steppenwolf at 50 doesn’t draw at all from the Dunhill albums, you might well wonder what the point is, really. Of course Steppenwolf continued long after the hits stopped, releasing albums well into…well, into the 21st century, believe it or not. John Kay was often the only classic-era member involved in those projects, but hey: he wrote a lot of the material and was always the band’s front man and leader.

And while albums like Slow Flux (1974), Hour of the Wolf (1975) and Kay’s 1973 solo release My Sportin’ Life may not have earned much in the way of positive review on initial release, if one picks over the post-Dunhill material, assorted gems can indeed be found. And that, ultimately, seems the reason behind Steppenwolf at 50.

To be sure, 41 tracks is a lot of Steppenwolf. And when one discovers that while classics like “Born to Be Wild” and the band’s other classic material are here – they’re presented in live versions recorded between 1992 and 1995 – one’s interest might be dampened a bit. But concentrate instead on the first two discs – most of which can now be considered more-or-less rarities – and there’s some fine music to be found.

“Hold Your Head Up” is best known as an Argent tune. But here have Steppenwolf covering the song, originally on an 1982 LP called Wolf Tracks. There’s a woefully-dated synthesizer carrying the tune, and Kay’s vocals are a bit weedy, but it’s a solid if uninspired cover nonetheless.

An undated Steppenwolf track called “Angel Drawers” is pretty good. Steppenwolf at 50 is distressingly short on details as to when and where some tracks came from, but this nearly-instrumental (“background” vocals come in very late in the song, suggesting that the recording is an unfinished backing track) is pure, classic Steppenwolf, whatever its provenance.

It remains to be seen whether the Venn Diagram of Steppenwolf fans and those who dig Grandmaster Flash and the Furious Five features circles that overlap at all. But if they do, Steppenwolf at 50 includes Flash’s “cover” of “Magic Carpet Ride.” It’s really more of a mashup. For rock fans, it’s of limited appeal.

Even the tunes that aren’t credited to Steppenwolf have their charms. Freed, one guesses, from the expectations of what his music “should” sound like, Kay recorded in the 21st century as John Kay & Company, and used some instrumentation that would have sounded out of place on ‘Wolf records (saxophones, for example). “Down in New Orleans” is a fun tune, and Kay’s unmistakable vocals bring a welcome familiarity to the track.

I wish I could tell you when Kay’s reading of “Compared to What” (first made famous by Les McCann) was recorded. Alas I cannot, and the publicist did not respond to queries. But it’s quite good. And what I can tell you is that irrespective of its origin, “Compared to What” sounds like classic-era Steppenwolf. It has none of the dated trappings of Kay’s ’80s and ’90s work. It sounds like it could have been a hit, had it been released in the Dunhill era. My suspicion is that it’s a recent recording, but who knows? Today’s instrument technology allows bands to sound like they did in the old days: a Nord keyboard gives you a solid Hammond organ, Wuritzer electric piano and so on.

And that reality colors the songs on Disc Three, live versions of classic-era Steppenwolf. The players aren’t the Dunhill-era guys, but they’re solid, and with faithful arrangements backing Kay’s voice, these sound like the versions you’ve come to know and often love.

Occasionally the band goes a bit off-message: “Magic Carpet Ride” starts off sounding like some progressive rock group, then like Argent. But after the needlessly extended intro, when the song-proper kicks in, the band nails it. Same holds true for “Born to Be Wild.” Seven-plus minutes is a lot of “Wild,” but some tasty solos let the players strut their stuff, and it’s all pretty exciting. Closing the whole set with a live reading of Hoyt Axton’s “The Pusher” seems like an iffy call, but the slow-burn tune works nicely.

In the end, I recommend this set, but with reservations and caveats as noted above. Bottom line: If you dig Steppenwolf, and if you have the Dunhill era records plus the singles collection Real Gone Music put together, there’s still one Steppenwolf disc left to add to your shelf. And it’s this one.