Khruangbin: Fascinating in Any Language

Crafting a musical style upon a foundation of Thai funk might seem a bit high-concept, especially if you’re a band that makes your albums in a barn in rural Texas. But as unlikely as it might seem, that’s the story that has grown up around Khruangbin, a trio based in Burton, a city of less than 400 souls.

Vocalist and bass guitarist Laura Lee admits that her group does draw some influence from a style of music that sought to reinterpret American funk for Southeast Asian audiences. But she thinks that too much has been made of the connection. “We got labeled as Thai funk because people couldn’t place our genre,” she says. “And because our name is Khruangbin,” she adds with a laugh. Literally translated from Thai to English, the name means “engine fly.” 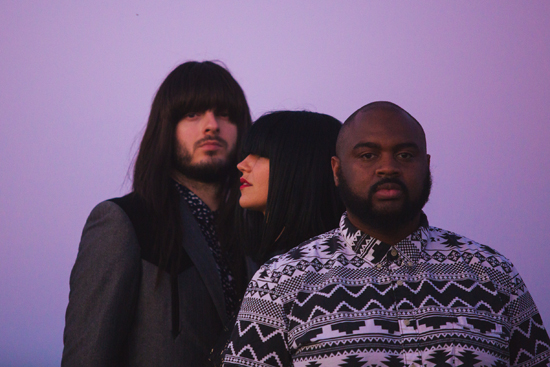 “People thought we were just interpreting the Thai music, but we’re just playing music that sounds good to us,” Lee says. “We are just who we are, and we’re pulling from influences that maybe aren’t the average thing that’s coming out of music today.”

In fact Khruangbin’s sound – a slinky, sultry and sometimes psychedelic stew with a decidedly cinematic feel – bears the influence of many exotic styles; many of the song titles on the band’s latest album, Con Todo el Mundo, are in Spanish. And thanks to drummer Donald Johnson, Khruangbin’s music owes a clear debt to hip-hop as well. “My approach to drumming is breakbeat-based,” he says, describing music that itself drew upon 1960s and ’70s funk and soul.

Johnson notes that ultimately, all three band members – himself, Lee and guitarist Mark Speer – “come from all different places, but eventually meet up together.” He believes that two acts that influenced his group (as well as most everyone else who has come along in the last few decades) are British instrumental band the Shadows and James Brown.

On the band’s earliest recordings, Khruangbin chose to focus on a purely instrumental approach. Even now, the vocals are used more as an instrument, providing tone color more than serving as a means to deliver a lyrical message. “When we started, nobody wanted to sing,” Johnson says. And when they did add vocals, the band decided to use a unison approach. That way, Johnson explains, “no one person stands out more than the others.”

Still, Lee emphasizes the Khruangbin’s lyrics are more than just sonic decoration. “You like something for the way it sounds,” she explains. “And then if it’s something that you’re really into, you can start to dig and find out that the raw ingredients are really special too.” She says that even though the lyrics aren’t the focus of Khruangbin’s songs, “if you went and discovered them, I think we would be proud of what you would find.”

Lee allows that she is surprised at the band’s popularity. “Especially when we have everything going against us: we’re mainly instrumental and we have a band name that nobody can figure out.”