New York City-based quartet Combo Chimbita plays its music in the present, but the band claims to live in the future. With an exotic and intriguing style of music the group calls tropical futurism, Combo Chimbita melds the most rewarding elements of so-called world music with an urban sensibility. The group is embarking on its first full-scale national tour in support of the debut album Abya Yala.

Three of the group members – all except vocalist Carolina Oliveros – have adopted pseudonyms to differentiate their work in Combo Chimbita from their other musical projects. But in some ways the effort is moot; the group’s sound is wholly original, even within the rich and varied musical landscape of New York City. Bassist/synthesizer player Prince of Queens explains that tropical futurism “is a way of re-imagining the future – where we are and where we’re going – based more on our ancestors than on sci-fi.” 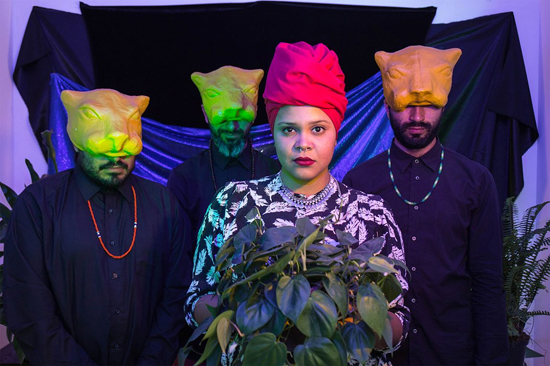 That unusual approach has its roots in the work of Sun Ra, and Combo Chimbita acknowledges a clear debt to the pioneering jazz artist who claimed to be from Saturn. But what they take from his work has more to do with a concept than a specific sound. Sun Ra developed a musical philosophy built around Afrofuturism, blending ethnic culture with science fiction. Combo Chimbita jettisons the space trappings and transfers the cultural grounding to a Latinx aesthetic.

Sun Ra “had a vision for music that was out of this world, and ahead of its time,” says Prince of Queens. “That ambiguity – that idea of concentrating time and space – is something that grabs our attention.” And Combo Chimbita’s musical identity is also informed by what Prince of Queens calls its members’ “bi-national” character. All four were born in Colombia, eventually immigrating to the United States. “I’ve been here more than half my life,” he says. “So New York is home. But also, home is Colombia. That’s why there’s the influence of the immigrant experience in our music.”

The musical genre known as cumbia has its origins in Colombia, where it began as a part of courtship rituals among people of African ancestry. In the 1940s the music’s popularity spread throughout the country; today, cumbia continues to exert a great influence on the Colombian music scene. The band members’ early years in South America found them immersed in the style, and it forms part of the basis of the Combo Chimbita sound. But it’s merely a starting point. “Cumbia keeps evolving,” says Prince of Queens. “It’s very basic, but in every country, it takes a different form; it keeps experimenting and changing.”

For generations, New York City has been home to many of the world’s best used record stores. And all members of Combo Chimbita – including guitarist Niño Lento and drummer Dilemastronauta – are avowed crate-diggers. “We all have a pretty big passion for record collecting,” says Prince of Queens. That passion yields interesting finds, and those records inform the group’s original music, adding the flavors of Haitian kompa (modern mérengue), African drumming, and modern cumbia variants from Mexico and Argentina.

Prince of Queens says he draws inspiration from Haitian groups including Shleu-Shelu and DP Express, both of which have been making music for decades. “Back in the day, they started incorporating synthesizers and electronic instruments in a way that was interesting and exciting,” he says. “I’m particularly interested in music that transcends time; it can be old but still sound fresh.”

The four musicians variously played together in other groups before pursuing the unique approach of Combo Chimbita. “We have traveled to different places with music,” says Prince of Queens, “and we have a very deep connection. It’s like family, almost. When it comes to making music, the hardest thing is to find the right people to make it with. And I feel incredibly lucky and privileged to be able to create music and perform it in front of an audience with my band mates.”

The group released its debut EP, El Corredor del Jaguar, in October 2016. On the heels of that release, Combo Chimbita ventured beyond New York City for the first time as a band, playing dates in Chicago and Los Angeles. Initially, they weren’t sure how they would be received. “We don’t sing in English,” Prince of Queens points out. “And we have some very not-mainstream ideas. But it’s fascinating to go to places where you don’t expect that music to resonate and have impact.”

But audiences were enthusiastic, and with the October 2017 release of Abya Yala, the band is now ready to introduce tropical futurism to a wider array of locales, including smaller cities like Richmond, Va., Boise, Idaho, and Asheville. “The experience is going to nurture our musicality tremendously,” Prince of Queens says. “After 30 shows, we’re gonna be playing pretty tight.”