In 1945, Austrian composer Hugo Kauder’s “String Quartet 4” had its American debut at Black Mountain College, the experimental liberal arts institution that flourished from 1933 to 1957. Its faculty included some of the era’s most prominent thinkers, including Buckminster Fuller and Merce Cunningham. Today, a string quartet is inspired by the work of another visionary, inventor Nikola Tesla. On Feb. 23, the Tesla Quartet played Kauder’s “String Quartet 4” along with works by Ravel, Gesualdo and Bartók, at a concert at the Black Mountain College Museum and Arts Center.

Hugo Kauder was invited to Black Mountain College in 1945 for a week-long residency, explains Tesla Quartet cellist Serafim Smigelskiy. “It’s going to be a journey back in time for the audience when we play the piece,” he says, noting that it hasn’t been performed since 1945. “It’s exciting to think that these walls have not heard this music all these years, and now it’s back again.” 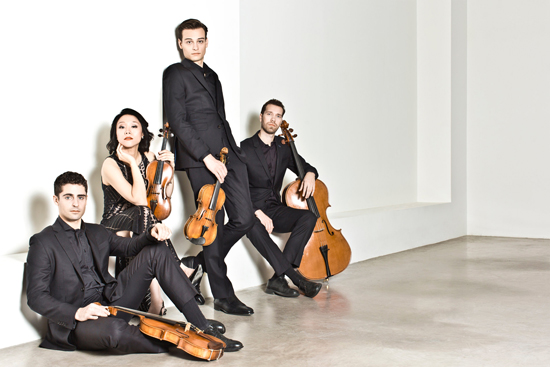 Formed in 2008 at the Juilliard School in New York City, the Tesla Quartet brings together some of the finest classically-trained instrumentalists to perform both beloved classics and brand-new pieces. Smigelskiy says that the Quartet is inspired by Tesla’s striving for excellence, his community involvement, and his interest in experimentation.

The Tesla Quartet actively encourages all of those values through its Call for Scores program. “We select a new, contemporary work every year,” Smigelskiy says. The competition is open to composers who write for string quartets. “This year, we got 233 submissions, and we’re days away from announcing our winner.”

Also on the February 23 program is Béla Bartók’s popular “String Quartet No. 3.” It was composed in 1927, the same year Kauder wrote “String Quartet 4.” And like Kauder’s piece, Bartók’s composition was the winning entry in a competition in the United States. “Those are some of the connections between these two pieces,” Smigelskiy says. “And Both Bartók and Kauder eventually immigrated here in the aftermath of World War II.” He says there’s a musical connection between the two deeply lyrical pieces as well.

Smigelskiy says that all of the pieces scheduled for the BMCM+AC performance share a theme of “extreme character and variety of expression.” He says that the works – the Kauder and Bartók pieces, plus Ravel and Gesualdo transcriptions by Tesla Quartet’s violinist Ross Snyder – all evoke “specific and very intense emotions.”

The Tesla Quartet cellist succinctly describes the character of each of the main featured composers. “Bartók has Hungarian rhythms, and Hungarian folk influences on his music. Kauder has fascinating characters and varied expression in his music. And Ravel is probably the ultimate impressionist composer, because he’s known for his gestural music and incredible variety of colors.”

Smigelskiy uses the word colors advisedly. “People always ask me, ‘What do you mean by colors in music?’ When we think of impressionism, we think of fine artists who use brush strokes to illustrate something that only human eyes can form into an object,” he says. “I think music can be a bit like that. Instead of using brush strokes, Ravel uses a specific note that he shapes in a unique way. The colors could be bold or faint; there are all these different shades. Ravel explores the spectrum: how each note could be shaped, how unique the sound could be, how it could be extremely different in volume.”

The Tesla Quartet – also featuring violinist Michelle Lie and Edwin Kaplan on viola – is firmly rooted in the classical idiom, but its members sometimes find their playing style informed by popular music as well. “The distinction between classical and non-classical music is very often hard to pinpoint,” Smigelskiy acknowledges. Citing Queen’s “Bohemian Rhapsody,” a work that the Tesla Quartet recently added to its repertoire, he says, “there’s always popular or rock music that is so well practiced and so thoughtful and complex that it transcends that ‘popular’ label.”

When not touring, the Tesla Quartet is currently based in Hickory, N.C. for a residency. And the accessible nature of classical music is a quality the Tesla Quartet seeks to communicate in its student outreach programs. “The ultimate achievement is when we’re able to inspire someone through music,” Smigelskiy says. “passing along an appreciation and love for music. That’s what counts the most.”