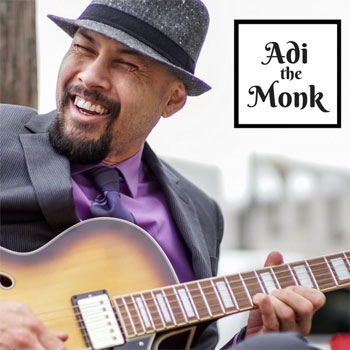 In the current music marketplace – a world in which many of the barriers to entry have, for better and worse, been removed – it never hurts to have an interesting back story. Asheville-based Adi the Monk certainly has his bases covered in that respect. He’s likely the only musician working in Western North Carolina who can claim to have spent eight years as an actual monk, traveling and/or living in India, Israel/Palestine, Nepal and the Philippines.

Against that backdrop it’s perhaps unusual to learn that the guitarist’s chosen musical idiom has less to do with notions of so-called world music and more of a grounding in American forms like blues, jazz and funk. That said, Eastern flavors do color tracks on his 2017 debut EP The Origin. Though the music on that four-track set is built around Adi’s soulful electric guitar work – with the very Western wah-wah pedal a prominent feature – there are hints of acoustic wind instruments that give an international flavor to the songs.

Adi has followed up that EP with a full-length release for 2018. Adi the Monk has a similar flavor to its predecessor, but benefits from a more polished production style. Still, the arrangements are exemplars of economy. Adi plays all of the instruments, but there often aren’t many. The standard guitar-bass-drums setup provides most everything needed to convey Adi’s ideas. He does make use of overdubbing, however: “The New Day” features two distinct guitar parts. One lays down a slinky, hypnotic rhythm, while the other winds and wraps around the melody.

“Momentum” leans in a laid-back jazz direction. The drums – which, like all of the instrumentation on the set, are played by Adi – are at the center of the arrangement here. Adi’s bass lines are subtle, and each of the two guitar parts he lays down provides sufficient interest on their own. Yet together they’re even more effective, creating a kind of instrumental dialogue/crosstalk.

“Feeling You Gone” has a blues foundation, but feels closer in spirit to Ali Farka Touré in its delivery; on this set, Adi seems to have found the means through which he can combine and express his multifarious background. “Mircocosmic” demonstrates that Adi understands the bass guitar’s use as a lead instrument; here it engages in conversation with an electric guitar while a second guitar lays down a funky yet understated rhythm.

The brief “Boy Beans Blues” is a more conventional blues number, but in the context of the varied tunes on Adi the Monk, it serves to showcase Adi’s versatility. Bossa nova textures inform “In Between Colours,” a gently impressionistic piece. “Rollin’” is a tidy, three-chord synthesis of jazz, blues and rock, in that order.

“Stay Up” brings the funk, albeit in subtle fashion; another bass showcase, it’s the most uptempo number on the set, with some tasty wah-wah work that recalls 1970s blaxploitation soundtracks. “In the Key of Blue” slows things way down, and feels like a late-night set closer, the sort played to the barkeep, a coterie of loyal fans and a room full of upended bar stools.

The actual album closer, however, is “For Every Hello,” a lovely and intimate track that once again illustrates Adi the Monk’s mastery of clean, simple and soulfully expressive arrangements. Adi plays in and around Asheville several nights a week, with regular gigs at Carmel’s Kitchen, Whistle Hop Brewing in Fletcher and other cozy venues.