Album Review: Joan Torres’ All is Fused — Of the Musical 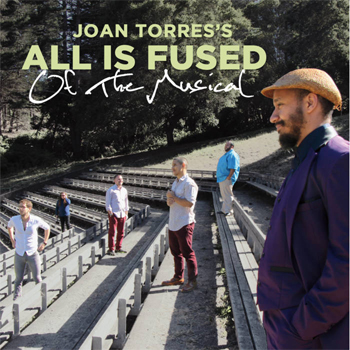 The golden age of jazz-rock fusion was a relatively brief period; arguably it began with Miles Davis’ In a Silent Way, released in 1969. The new form enjoyed a number of highlights: Davis’ Bitches Brew and Jack Johnson, Larry Coryell’s albums with Eleventh House, as well several albums from Chick Corea’s Return to Forever, Weather Report and John McLaughlin’s Mahavishnu Orchestra. Established names like Julian “Cannonball” Adderley waded into the style with success on sets like 1971’s The Black Messiah. But by the close of the 1970s, most of the artists who had explored the hybrid genre had moved on to other things.

Fusion’s influence was felt more on the rock side of things, within the subgenre of progressive rock; even today, boundary-pushing acts like King Crimson draw upon some of fusion’s tenets and values. But within the jazz world, there largely there seemed to be an attempt to put fusion behind, often treating it like an embarrassing misstep or a badly dated costume or hairstyle. In its place, jazz fans were forced to make do with the god-forsaken smooth jazz (see: Kenny G, Bob James, and to a slightly lesser extent Spiro Gyra.)

So it is with great enthusiasm that this reviewer listens to Of the Musical, the oddly-titled release from Joan Torres’ All is Fused. The latest release from the San Francisco-based musician (originally from San Juan, Puerto Rico) earned a nomination at last month’s annual Independent Music Awards.

The set opens with “Invaded,” which begins not sounding at all like fusion. But as the arrangement opens up, the tune gets more and more adventurous. The skronky guitar toward the track’s end is reminiscent of Sonny Sharrock’s work. “Demiurge” takes a similar approach, starting out fairly conventionally – drawing the listenner in – -and then heading off into the outer regions. Torres’ bass work is particularly tasty.

“Expore” starts out charting a serene path, but as the tune unfolds, Emanuel Rivera’s left-field piano solo breaks the reverie. Rock fans might hear shades of Mike Garson’s manic piano contribution to David Bowie’s “Aladdin Sane,” and that connection highlights the ways in which fusion draws from the best of both the jazz and rock idioms.

“Ultramarine” is a minor-key mood piece; “Constant Stream” is more uptempo, and features some wonderful Rhodes work. Jonathan Suazo’s tenor sax is a centerpiece of “Stream of Melancholy,” and the tune makes effective use of hushed tones that draw the listener close. Fernando García’s splashy drum is showcased on the brief “Look Around.”

Of the Musical closes with its longest – and perhaps finest – track, “Unleashed.” Distorted electric guitars engage in lively dialogue with Torres’ bass, drums and the other players. The tune moves through what feels like several distinct movements, giving each player a turn at blowing. It’s all delectable, but Rivera’s electric piano once again deserves special mention, as it alternates between fiery single-note melodic runs and spirited chording.

It’s very encouraging to discover an album like Of the Musical in the second decade of the 20th century and it’s equally encouraging to see the album (and its makers) earn deserved recognition.