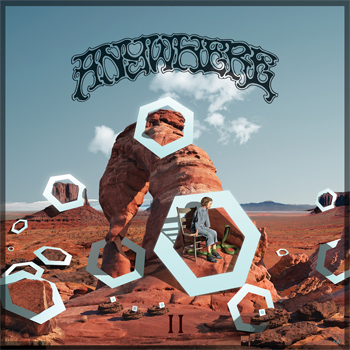 Anywhere is an aggregation of indie/underground artists who collectively make a psychedelic folk sound. But Anywhere doesn’t sound like acid-folk, though: there’s a solid rock foundation to the group’s music. A swirling feel that conjures memories of the Beatles’ “Tomorrow Never Knows” characterizes songs like “Bone Flute Blues.”

On II, Anywhere conjures a soaring, surprisingly accessible sonic stew. The group – a rotating cast that includes Mike Watt – hasn’t been terribly prolific, and some of Anywhere’s releases have been in connection with Record Store Day. The group’s second full-length is just such an item. Fans of Black Angels (to name just one touchstone) will find II pleasantly warm and welcoming; Anywhere combines the gentleness and texture of Fleet Foxes (without that group’s mannered vocal approach) with a hypnotic instrumental approach that at times recalls mid-period Led Zeppelin.

The vinyl for this RSD release is a translucent pale blue, and the cover art – front and back – is simply stunning in his vividness and eye-popping high resolution.