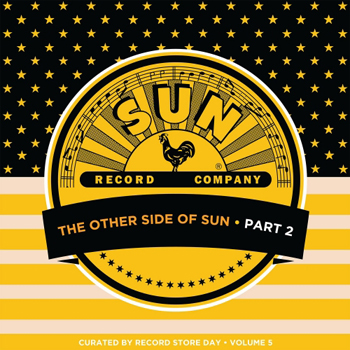 The Other Side of Sun, Part 2
Sun Records had seen its heyday come and go by the time Shelby Singleton bought the label in the late 1960s. But purchase he did. And with that, Sun became part of an impressive catalog that included plenty of hits in a wide variety of genres.

Even though most of the titles on this collection weren’t originally released on Sun – instead they came out on labels like Amazon, Black Prince, Minaret and so forth – they’re presented her under the Sun banner. Some liner notes would have been helpful, since none of the artists documented here ever made it big, but that’s not a serious knock.

The tunes themselves are of varying quality and interest: Betty Harris’ “All I Want is You” finds the singer warbling woefully out of tune. The blues numbers are among the best cuts here, but while The Other Side of Sun Vol. 2 is interesting, it’s somewhat short of essential. Black vinyl; no download card.

Right On Now: The Sounds of Northern Soul
“Northern soul” is a mightily curious and potentially misleading term. It’s reasonable to guess that the label refers to 1960s soul music that came from the Northern part of the United States” Detroit, Motor City, to be specific. That would differentiate it from “Southern soul,” the product of Memphis record labels like Stax and Hi, and music that came out of Muscle Shoals, Alabama.

But that’s not right, not at all. In fact Northern soul represents a movement more than a musical style. It refers to a resurgence in popularity of American soul music of the 1960s, yes, but from pretty much anywhere in the U.S. And the renewed interest took place in Northern England.

With that bit of disambiguation hopefully dispatched, it’s a bit easier to make sense of a new vinyl compilation – released for Record Store Day 2018 – from Org Music, a division of Rhino Entertainment. Right On Now! is a collection of 16 tunes – mostly one that will be familiar only to cratediggers and soul fanatics – packaged in a sleeve designed to look like a vintage various-artists set.

Some of the names will be familiar: Ike & Tina Turner, Bettye LaVette, Athur Conley – but for the most part the songs – all originally released as singles on labels like Loma, Jubilee, Calla and Atco – are obscurities.

Which isn’t to say they’re not good. Perhaps nothing here quite qualifies as great, though the Olympics’ version of “Good Lovin’ (not the first recording of the song, but released before the Rascals’ cover) comes close. The entire set is fun, and the relative obscurity of the music makes it well worth hearing.

The Record Store Day release is pressed on white swirl vinyl; no download card is included.