Jackson got a deal that saw him relocating briefly to London, so he and Barnes parted ways. Around that time Barnes got a call from George Clinton, then with Golden World Records in Detroit. “I was missing working with him and he was missing working with me,” Barnes says. “We were always trying to impress each other.” Barnes moved to Detroit and formed a writing/production team with Clinton and saxophonist Mike Terry. “Mike would do the arrangements,” Barnes recalls, “and George and I would write the songs. We just were high all the time, smoking weed. Nothing wrong with that!”

The team worked on projects for soul-funk acts Parliament, Edwin Starr, and the Dramatics. They often used Motown session musicians, but took care to make sure that the notoriously territorial Berry Gordy wouldn’t find out. 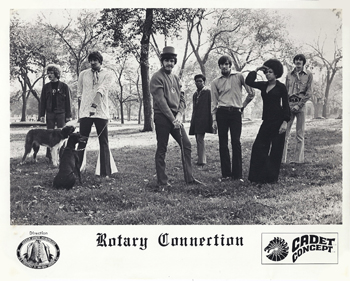 By 1967, Barnes was a big fan of the Beatles, and he often tried to write songs in a Beatles style, only to be told those wouldn’t sell. “I wrote a song called ‘Turn Me On,’ he says. “It was about a hippie asking for a blessing. Everybody thought it was about drugs, but it’s not.” Friend Andres Williams (“Bacon Fat” and “Shake a Tail Feather”) heard the song and suggested Barnes do a session at Chess Records. As they headed toward Chicago, they could see a rioting Detroit in flames in the car’s rear view mirror.

Once the session ended, Barnes found himself stranded. “Andres got paid and left,” laughs Barnes. “I was left in Chicago, wondering what I’m gonna do.” Walking innocently around the city, he wandered through territory claimed by a gang called the Blackstone Rangers. From there he went to the Disciples’ turf, where he was set upon by gang members. They interrogated him, wanting to know which gang he was allied with. “I don’t know,” he said, terrified. “I’m just a guy.” But when they found out he was a songwriter, their collective demeanor changed, Barnes says. “They started asking me, ‘You were with Motown?’ So, everybody came around me, wanting stories. ‘What’s Stevie Wonder like?’”

The ringleader decided he liked Barnes, and let him go, on the condition that he make some records with a few of the gang members. Barnes’ “One Girl” on Sunflower Records would be credited to Andre Scott with Jessie, Otis and Shotgun. Barnes discovered that the last of those – who earned his nickname just as one would guess – wasn’t a great singer, and had planned to ease him out of the group. But Shotgun persisted, asking what he needed to do. Barnes told him to learn guitar, which he did. “He went on to become one of the best guitar players any of us knew,” Barnes says.

Eventually Barnes landed at the home of Chess recording artist Greg Perry. One day, Perry came home and told his friend some Chess Records news. “Marshall Chess is putting together some psychedelic group,” he told Barnes. “Man, I don’t like that shit. Maybe you ought to do it.” Barnes thought the idea sounded like an interesting experiment. He went to see Chess the next day.

“Marshall said, ‘I want to get together this group who has everything: jazz, blues, rock, gospel, some of the psychedelic stuff, Beatles stuff. You got any songs?’ I played ‘Turn Me On,’ and sang it like Paul would, with the accent.” Hooking up with a white rock band called Proper Strangers (they couldn’t play,” laughs Barnes), he joined vibraphonist/arranger Charles Stepney and session musicians Morris Jennings and Phil Upchurch. The new group would be called Rotary Connection. 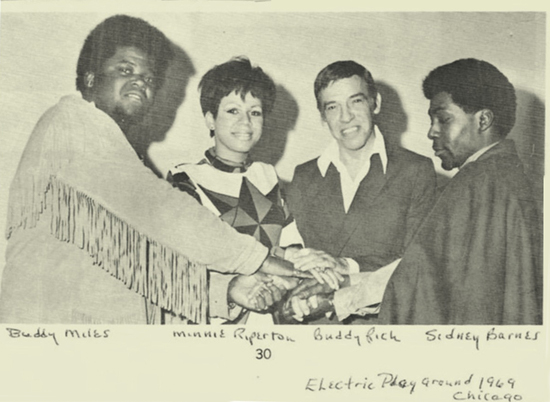 “We cut the album,” Barnes says. “It was a lot of fun, some strange shit. Sitars and things.” A Chess office receptionist named Minnie Riperton was heard singing along with the playback. Her five-octave voice sounded like a Theremin. Barnes says, “we were like, ‘What the…?’ But George Clinton and I used to always say, ‘That’s the kind of thing we want to hear!’” Riperton was shy, though, and it took some serious coaxing to get her to overdub her voice onto the recordings. Performing would be another matter entirely.

The all-white Proper Strangers went out to perform as Rotary Connection, but the results were disastrous. “The feedback was like a tsunami coming back to Chess,” Barnes says. “Promoters said, ‘If you ever send us some shit like this again, we’re gonna black ball you, and you won’t get no money!’” Marshall Chess then approached Barnes and Riperton and pleaded with them to join the band onstage for two shows at a hip Chicago club.

They agreed, but Barnes realized that dressing r&b style wouldn’t cut it in a rock club. So he got Chess to pony up some money. “I got Minnie a great, big ol’ afro wig, and I bought her a tie-dye dress down to the floor with some bracelets. I bought myself some boots and a cape, and a big old hat, and some beads and shit.” With a bit of coaching to the Proper Strangers (“Follow me. Smile. Act like everything is cool”), they were ready. The gig was a smashing success. “Next thing I knew,” Barnes says, “we were touring and opening shows with Janis Joplin and the Rolling Stones!” 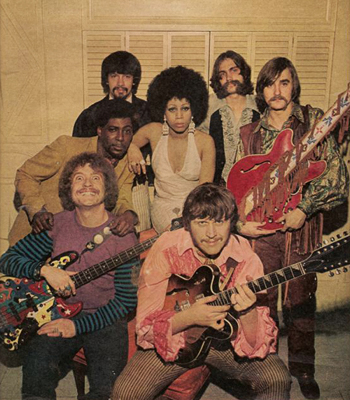 Membership in the group would be fluid as Rotary Connection toured and released a half dozen albums between 1967 and 1971; Barnes and Riperton would form the nucleus of the group. For the first time, and after years of working largely behind the scenes, Sidney Barnes was achieving high-profile success. He recalls being asked to provide references on an application for a luxury apartment in downtown Chicago. “’Can I put down Ramsey Lewis? Can I put down Leonard Chess?’ It was all white there,” he says. “I’m the black dude in the building, and I’m a star!”

Ramsey Lewis’ drummer Maurice White was ready to strike out on his own, and tried to get Barnes and Riperton to join his new group, but they both said no. “With Rotary, we were able to have limos, flying airfare and good gigs,” Barnes says. “We were doing the college circuit, playing with big stars, and they were treating us royally. I figured if we went with Maurice, since they’re a black group, they’d get the black group treatment. When Rotary got into a town, we got the white band treatment.”

After Rotary Connection folded in the early 1970s, Barnes went on to do a fair bit of television commercial work. White called upon Barnes once again, this time for a different, one-off project. He had secured a production deal, and was making an album with Deniece Williams, former singer with Wonderlove, Steve Wonder’s band. Barnes was asked to sing backing vocals. “And I ended up working on her next three albums,” Barnes says.