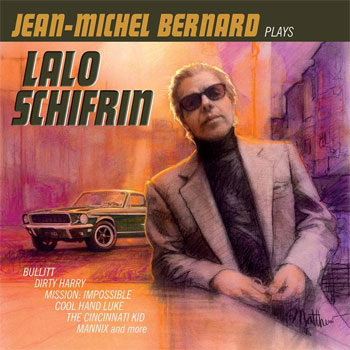 Viewers of American film and television in the late ’60s and early 1970s were weaned on a steady diet of jazz, though they might not have noticed it happening. Especially in the action and crime drama genres, jazz (or jazz-flavored) music was often a foundation of the programs’ soundtrack. And no composer’s work more exemplifies the exciting, kinetic and evocative TV music of that era as well as that of Lalo Schifrin.

Born in Buenos Aires, Argentina, Schifrin began working in American television in the 1950s. By the 1960s he was releasing albums that followed on from the then-hot bossa nova trend, and even released a swinging LP with the bizarre and cumbersome title The Dissection and Reconstruction of Music from the Past as Performed by the Inmates of Lalo Schifrin’s Demented Ensemble as a Tribute to the Memory of the Marquis De Sade. Self-indulgent title aside, it’s a fascinating and cinematic treatment of jazz themes.

Schifrin followed that release with 1967’s Music from Mission: Impossible, the music for which he would become best known. But he was and remains prolific: counting soundtracks (which make up nearly half of his oputput) the man has release something on the order of 80 albums.

And fans of Mission: Impossible will be treated to a brief piece that they’ve heard countless times, all without even knowing it had a title. “The Plot” was cued as the IM Force wrapped up their sting of some international bad guy. Its presence here is good for a chuckle, and underscores just how effective Schifrin’s writing and arranging truly is. Bernard’s arrangements are faithful but different enough form the originals to make them completely worthwhile. And the man himself (Schifrin) guests on the album, as does Kyle Eastwood, Clint’s son.

Anyone who appreciates and enjoys the thrilling jazz-pop of the Mannix and Dirty Harry era will delight in this new collection.