A Look Back at ‘Eric Clapton’s Rainbow Concert’ 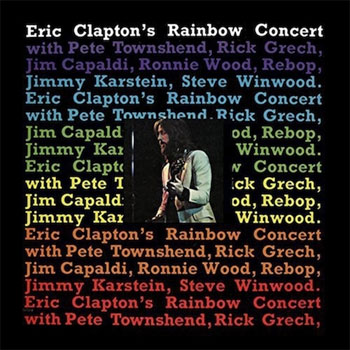 As 1972 came to a close, guitarist Eric Clapton had been musically inactive for nearly two years. He enjoyed a burst of activity in 1969, a period in which he played live and in the studio with Blind Faith, John Lennon (documented on Live Peace in Toronto 1969) and Delaney & Bonnie and Friends (showcased on the duo’s On Tour with Eric Clapton). Near the end of that year, he took part in a one-off celebrity concert in London with Lennon, George Harrison and others to benefit UNICEF.

in 1970 Clapton played on sessions including Harrison’s All Things Must Pass triple-album. He continued his creative and productive streak with the the landmark Layla and Other Assorted Love Songs, crediting the release to Derek and the Dominos. That same year, the group – not including guest guitarist Duane Allman – toured and recorded a live album, In Concert; that double LP would eventually be released in 1973.

Clapton did surface briefly in the summer of 1971 in New York City to appear as a backing musician for George Harrison’s all-star benefit Concert for Bangladesh. But other than that admittedly high-profile project, Clapton was absent from the music scene for the better part of 1971 and 1972.

The primary reason for Clapton’s disappearance was his descent into the throes of heroin addiction. His condition was partly the result of (or exacerbated by) his unrequited love for Pattie Boyd Harrison, wife of his friend George.

Another friend, Who guitarist Pete Townshend, knew of Clapton’s plight and urged him to return to active musical duty. To that end, Townshend organized a pair of concerts – a matinee and an evening performance – to be held January 13, 1973 at London’s Rainbow Theatre.