Muscle Shoals Has Got the Swampers, Part Two

Several locales across America each had their own collective of top session musicians. Nashville had a large and varied group of session cats. Los Angeles had the Wrecking Crew; Detroit had the Funk Brothers. And Memphis had both the Hi Rhythm Section and the crew at Stax; the latter included Booker T & the MGs. So while the average listener may not have known about the pro musicians who played on many of their favorite hits (record sleeves “didn’t always list the names of the musicians back then,” Hood says), the groups of session players across the U.S. were all aware of each other.

“We were very aware of those other guys,” Hood admits. “When I started playing sessions, I went out and got several albums that [featured] the MGs or the Funk Brothers, and I would sit and listen. I would play, and emulate as much as I could what they were doing.” 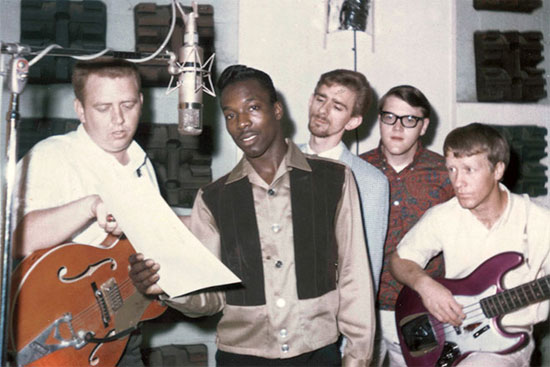 In the early years working at FAME and then at Muscle Shoals, the Swampers didn’t read music. At first, they worked using “head arrangements.” But Hood says that he soon encouraged his band mates to make written charts. “Because there would always be a disagreement about, ‘Well, no, you were supposed to go to something on the second verse,’ or this or that.” Hood had taken some elementary music classes at the local college, and he knew about a musical notation system that used Roman numerals.

But he found that Roman numerals were too hard to write, so he came up with a homemade system. “It was much later that we found out that it had a name,” Hood chuckles. “They called it the Nashville Number System, but we were doing it before we knew it had a name!” Mastering that approach gave the Swampers great flexibility. “When you’re recording with people, they often say, ‘it’s too high’ or ‘it’s too low; Let’s change it to a different key.’ With a number system, you don’t have to rewrite the chart.”

Hood believes that those charts were one of the Swampers’ greatest strengths. “We were all able to read the same chart, and we were all able to adapt if we had to change.” Responding quickly and effectively to changes required by the producer or featured artist was critical. “When paying for studio time, an engineer, and musicians, that saves you money,” he says.

Once they moved to their own studio, the Swampers expanded their musical reach in even more directions. Throughout their collective career they would work with a diverse array of artists, from Cher to Bob Seger to Herbie Mann, from Paul Simon to Albert King to Boz Scaggs, from Johnnie Taylor and the Staple Singers to Rod Stewart. And one of the Swampers’ more unlikely collaborations would eventually find the group doing something very uncharacteristic: touring.

British group Traffic had just completed recording its fifth studio album, The Low Spark of High Heeled Boys. Hood recalls that Traffic’s rhythm section of Ric Grech (bass) and Jim Gordon (drums) was “having some substance abuse problems, to say it delicately. And so they fired them, and hired us.” The Swampers toured as part of Traffic throughout 1972. But Hood says that on the first tour, the Muscle Shoals musicians agreed to work for too small a sum. “I think our price was what it would cost to rent the studio for a couple days,” he says.

At the end of a successful tour, Steve Winwood and his British band mates wanted the Swampers to stay on to make a studio album; the expanded group recorded 1973’s Shoot Out at the Fantasy Factory. “By that time,” Hood says, “we thought, ‘well, we’re gonna get paid more properly this time,’ and so we did.” By all accounts, the musicians got along quite well. “It was fun, but it was just too crazy,” he says. “All of a sudden, we were exposed to drugs and wild women, and all kinds of things.”

But the lure of heading home eventually proved strong, and the Swampers left Traffic after the release of the live double LP On the Road. Not only did Hood and his Muscle Shoals band mates have families, but they had the studio back in Alabama. “That was probably the biggest thing,” he says. “We had to stay there to support our studio.”

Hood says that over the course of his career, he’s done maybe four or five concert tours; his most recent was with Mike Scott’s Waterboys. “I’ll go on the road with somebody and then I’m like, ‘Woah. Now I know why I work in the recording studio!’”

The new collection of Swampers tunes contains some fine music. Several of the tracks date from a series of early ’70s sessions for an Island Records album, planned for release decades ago. Hood recalls thinking, “Maybe we need to make a record, because we’ve never done anything for ourselves. We’ve always been a backup band for other people.”

One of several album highlights is “Whiplash,” featuring session guitarist Pete Carr, playing in a style reminiscent of George Harrison’s 1970s work. And the group-penned “MSS Down by the River” features some tasty and understated analog synthesizer work. Four tracks on Muscle Shoals Has Got the Swampers were recorded in the 1990s for Swedish radio personality Kalle Oldby; he used portions of the tracks as “bumpers” during his broadcasts.

David Hood believes he knows the secret to what made the Swampers and Muscle Shoals Sound Studio special. “It was the first studio that I know of [where] the rhythm section owned the studio,” he explains. “When we decided to go into business with ourselves, we didn’t have any money, and so we made an agreement among ourselves that we weren’t gonna work unless we worked together. Or, at least, that everybody got paid, anyway, and we were only gonna work there under most circumstances.”

And the studio came first. “We said, ‘Look, nothing is more important than us doing what we’re doing, including girlfriends, wives, Christmas, anything.’ It was after our interest to stick together like that,” Hood says. “And that’s a rare thing, I think, in most cases.”