In an unprecedented burst of creativity, New York City musician Brian MacWilliams wrote some 300 songs in the space of just a few years. Midway through that streak, he was diagnosed with ALS (Amyotrophic lateral sclerosis, often known as Lou Gehrig’s disease). But a community of friends and supporters – in New York, Asheville and beyond – has come together for MacWilliams. Two concurrent projects are underway: one is an album of MacWilliams’ songs, provisionally titled Being Here; the other is Brian’s Songs, a documentary that tells his story.

Before his illness, Brian MacWilliams was an enthusiastic outdoorsy type. Surfing and snow skiing were among his favorite pursuits. He often shared those activities with two of his best friends, Asheville videographer/musician Scott Reese, and next door neighbor and documentary filmmaker Michael Rossatto-Bennett. “Brian skied as though he was running out of time,” says Rossatto-Bennett. “It was like he wanted to achieve a certain level of mastery before his body was old.” 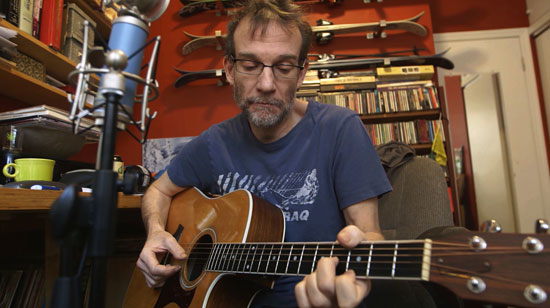 MacWilliams was also putting his heart and soul into music; he and Rossatto-Bennett would play guitar together every night. “We’d start around 10 o’clock at night, and we’d stop around midnight,” Rossatto-Bennett recalls. Though no one knew it at the time, after those jam sessions, MacWilliams would return home and write songs, often until 4 a.m.

“The songs started coming,” Rossatto-Bennett says. MacWilliams felt that his songwriting spurt was the beginning of a new journey. “He didn’t know where [the songs] were coming from, and he had this feeling like it wasn’t gonna last.” And it didn’t; as MacWilliams fell ill, his ability to play deteriorated, eventually leaving him completely. Today he’s unable to sing as well.

“Once Brian got diagnosed, there wasn’t a lot of energy to write these songs,” Rossatto-Bennett says. “So he kind of just forgot about them.” But his friends didn’t forget. Working with MacWilliams, they put together a plan to build upon spare guitar-and-vocal demo recordings he had made of his songs. Enlisting the help of top production and musician talent, the songs would be completed professionally. A Kickstarter campaign quickly raised more than $65,000 to defray the costs of making the album and documentary.

The whole thing would be done quickly so that MacWilliams would have time to hear and appreciate the final product. His raw home recordings were cleaned up and put into multi-track digital format at Echo Mountain Recording. And in a process not unlike what the then-surviving Beatles did in 1994 with John Lennon’s home demos for “Free as a Bird’ and “Real Love,” some of Asheville’s best musicians overdubbed instruments and vocals to create finished recordings. Sessions are now complete, and the tracks are being mixed. Being Here will be released – first to the crowdfunding campaign supporters – as a 2LP vinyl album.

MacWilliams’ songwriting is informed by the music of the Grateful Dead and the lyrical style of Townes Van Zandt, among others. The principals are keeping a tight lid on the work-in-progress; their goal is to first unveil the songs to MacWilliams and Kickstarter supporters. An early Echo Mountain session – with MacWilliams in attendance – was live-streamed in February of 2017, but nothing else from the sessions has yet been made public.

Reese explains that the cache of songs – fifteen or so of which are being finished for the album – is filled with sad songs about love. But in hindsight – and though they weren’t written with MacWilliams’ impending illness in mind – the lyrics seem poignantly relevant in light of the songwriter’s struggle with ALS.

The album-in-progress has had at least two provisional titles since inception. At first MacWilliams called the album Bring Out Your Dead, a line from the film Monty Python and the Holy Grail. And more recently the working title has been Brian’s Vanity Project. Reese makes it clear that both working titles are MacWilliams’ dark, inside jokes. They’re funny,” he says, “if you get the joke.”

Rossatto-Bennett’s film is yet to be completed, but he’s doing what he can to finish it in time for MacWilliams to screen it. “I’ve been living with this story,” says the Sundance Award-winning documentarian. “But I haven’t been able to pick up a camera, because…” His voice trails off.

Plans are also underway for concerts to be staged in Asheville and New York City, but at this point, details are few. “We haven’t quite figured that,” Rossatto-Bennett admits. “How do you do a concert when the main vocalist can’t sing? We’re not sure.

“Life is hard,” he says. “Every one of us dies; every one of us suffers. That’s what it means to be human. And if you work together to make life beautiful, even the worst things that life can throw at you, become bearable and even joyous. What we’re really trying to say with this project is this: we’re not alone.”