As the 20th century approached its end, a group of college students began getting together informally to play bluegrass. None of them could have imagined that they’d still be together in 2018, performing concerts backed by members of the Asheville Symphony Orchestra. In support of their 13th and latest album, Out in the Open, the Steep Canyon Rangers played the US Cellular Center’s ExploreAsheville.com Arena January 27.

Banjo player Graham Sharp recalls the early days in Chapel Hill, North Carolina. “It was just us hanging around, having a good time,” he says. “We were loving the music, and we just did it and did it.” But once they graduated, the original core set of musicians – Sharp plus guitarist Woody Platt and upright bassist Charles R. Humphrey III – focused more intently on making music.

The musicians collectively relocated to Asheville shortly thereafter, moving into a house in Asheville’s Charlotte Street neighborhood. “We had a house up above the Charlotte Street Pub,” Sharp recalls. “I can’t believe the house is still standing…if it even is.”

But Asheville would serve mainly as a home base for the new group. “We went out to Colorado and won a band competition at a festival,” Sharp says. “And it was unlike anything I had ever imagined.” He considers himself fortunate to be in a group of musicians who are “in it together, moving in the same direction, and with very complementary talents. I couldn’t have drawn it up on a piece of paper back then,” he says, “but it’s worked somehow.” 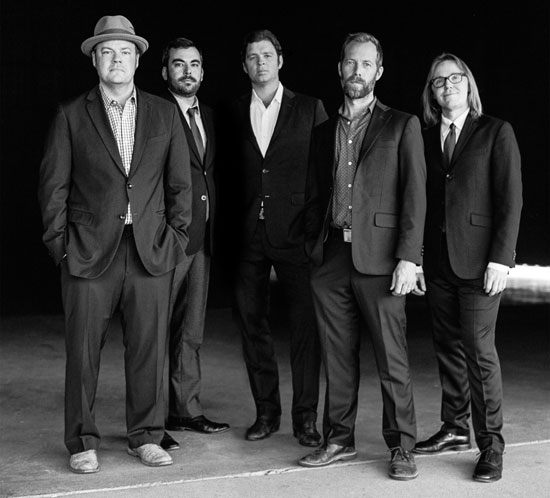 It has worked indeed: today the group still features two of the founding members (Humphrey left in late 2017) plus mandolin player Mike Guggino who had joined early on, and fiddler Nicky Sanders, who joined in 2004. In 2013 the group added Michael Ashworth on “box kit” percussion built around Peruvian cajóns. To date the band has been recognized with two Grammy nominations, one of those (2013’s Nobody Knows You) winning Best Bluegrass Album.

Beginning in 2009, the Rangers began a musical relationship with banjo player-actor-comic Steve Martin; world tours, high-profile television and festival dates and a string of albums would follow. The third of those, The Long-Awaited Album was released last September, and soared to the top spot on Billboard‘s Bluegrass Album chart.

And in October 2017, the Steep Canyon Rangers were formally inducted into the North Carolina Music Hall of Fame. Sharp says that the experience was mind-blowing. For a display at its Kannapolis facility, the Hall had requested his old guitar. “It was this old Sears guitar, barely holding together,” he says. “But if you stand in just the right place, you can see the guitar, and in the background is one of John Coltrane’s saxophones. And at that point, you’re just like, ‘What the hell am I doing here?’”

Sharp and his band mates were moved to be honored by an institution that pays tribute to the state’s giants of music, a roster that includes James Taylor, Doc Watson and Nina Simone. “The breadth and depth of North Carolina music is just so staggering, from the mountains to the Piedmont to you-name-it,” Sharp marvels. “Whatever style, whatever era.” And the Hall of Fame honor recognizes the Steep Canyon Rangers’ part in that rich and ongoing musical tradition. “It’s a ridiculously crazy honor to be in there,” Sharp says, “but it’s also just a reminder of how great this state is for the music we love.”

Though nominally a bluegrass group, the Steep Canyon Rangers have never been slavish about coloring inside the lines of their chosen musical idiom. “Obviously, we cut our teeth on really traditional bluegrass,” Sharp says. “That’s where we got our start, but I think there are lots of traditional kinds of roots music that we love. Bringing in elements of different stuff – whether it’s blues, rock ‘n’ roll, rockabilly, or just some of the songwriters’ styles that we love – just feels natural.” Sharp says that if there’s an overriding philosophy to the band’s approach to music, it’s this: “Let’s really serve the song. We find a song that we love, and not try to shoehorn it into a particular style.”

The group’s open-minded approach means that elements of classical music can often be seamlessly worked into arrangements. And that’s what happened when the Steep Canyon Rangers played their Asheville date, the day after the official release of Out in the Open. Ten members of the ASO joined the group onstage for several songs. And while the Rangers have augmented themselves with classical musicians before, this hometown show was different. “We’ve never had a symphony out for a show where people will be standing, dancing, and stuff like that,” Sharp said ahead of the performance. “So that’ll be a new experience.”