Engelbert Humperdinck’s Enduring Love for Recording, Performing, and His Wife 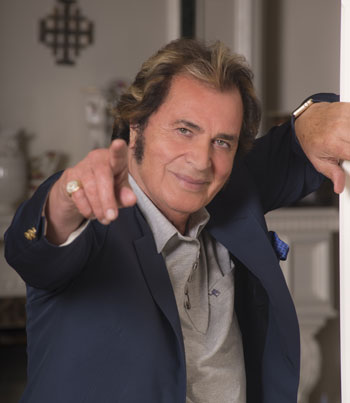 When it comes to what was known in the rock era as “adult” music, there exists a pantheon of vocalists who enjoyed both critical success and staggering commercial achievements. British pop singer Engelbert Humperdinck is among the few to achieve that rarefied degree of notoriety. With a recording career that began with the 1967 hit “Release Me” and continues to this day, Humperdinck has sold more than 150 million records. And at age 81, the preternaturally youthful singer has released The Man I Want to Be, a musical love letter to his wife of 53 years. In support of what is nearly his 100th album, Humperdinck is currently on tour.

The 14 songs on The Man I Want to Be were selected to express Humperdinck’s enduring love for his wife Patricia, who is dealing with the effects of Alzheimer’s Disease. The singer credits Jurgen Korduletsch, the owner of his record label, for coming up with the album’s concept. “I had no idea what the next album was going to be all about, but when he brought these ideas to me, it struck a chord,” he says.

The contemporary yet timeless-sounding record includes songs written by Willie Nelson, Ed Sheeran and others. “How Can You Live” was written by Richard Marx and Fee Waybill; the song was first recorded by Waybill’s group The Tubes in 1996. Humperdinck’s reading is decidedly more romantic. Though he sometimes listens to previously recorded versions of songs (“so I don’t copy their style,” he says), in the case of “How Can You Live,” he didn’t hear the Tubes’ original until he had cut his own version. “I love their version, too,” Humperdinck says. “It’s very rock’n’roll-ish.”

Remarkably, Humperdinck’s voice doesn’t seem to have changed much in the half century since he scored with “Release Me” and “There Goes My Everything,” both Top 20 hits in the U.S. But he admits that he doesn’t do any special exercises to keep his voice in shape. “I’ve been very fortunate,” he says. “I think just to continue to work in show business and be onstage keeps me young and keeps my voice in line.” He allows that he does change the key of a few of his older songs for live performance, dropping them by one step (“we call them tones in England”), but says that his range – three and a half octaves – remains virtually intact.

Another way in which Humperdinck maintains continuity in his recorded music is in his choice of arrangers. Johnny Harris was the arranger on Humperdinck’s 1968 single, “Quando Quando Quando.” Some 50 years later, Harris is among the arrangers who worked on The Man I Want to Be.

And lest anyone think Humperdinck is a relic from a previous generation, it’s worth noting that he saw – and recognized – a leading light on today’s pop landscape when that singer was only 5 years old. Some 27 years ago Humperdinck was at a fan club party in Hawaii, celebrating the end of another successful tour. “The entertainment was Bruno Mars,” he recalls with a smile. “I said to him then, ‘Young man, you’re going to be a big star.’”

The Man I Want to Be features a vocal duet with another singer whom Humperdinck thinks has a bright future. His nine-year-old granddaughter Olivia guests on “I’m Glad I Danced With You,” another of the musical love letters that characterize the album. “I think she’s going to be another Bruno Mars, if you want to know the truth,” says the proud grandfather.

When he’s not on the road, Humperdinck is at home caring for his wife. “She’s doing well,” he says, noting that a newly-developed treatment is having a positive effect on her condition. Meanwhile, he hasn’t slowed down his schedule of live performances. While he considers studio work an expression of creativity, he loves being onstage, at once singing love songs for his fans and to his wife at home. “I consider myself a thespian of song,” he says. “So, when I’m singing onstage, the lyrics mean something. I don’t just sing them willy-nilly; I really know what I’m singing about.”