Asheville has a remarkably thriving music scene. In any given week, there are multiple opportunities to take in live performances of original music in a wide variety of genres. But some styles are more fully represented than others. And to make sure that straight-ahead rockers get their share of love in this music-focused city, the Asheville Rock Collective was born. In February 2018, the collective scheduled two weekly concert series: one at Pisgah Brewing in Black Mountain, and another at Fleetwood’s in West Asheville.

“In the past five, six years or so, the whole state’s been taken over by [Grateful] Dead cover bands and the whole jam thing,” says Derek “Duke” Frye of decidedly non-jamming band the Dirty Badgers. But he admits to drawing inspiration from the jam-band scene. “Seeing how those groups kind of banded together, we thought, ‘Why not do that with the rock music that’s coming out, too?’” 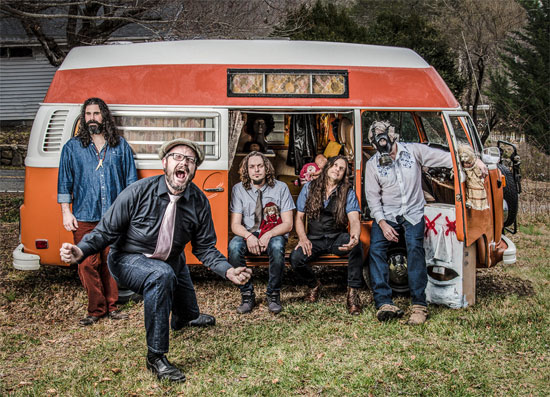 John Kennedy of local rockers the Egg Eaters agrees. “Jam bands and bluegrass are what people expect Western North Carolina [music] to be like,” he admits. “But among the people who are actually living here and creating music, that’s not so much what I’m hearing.” He believes there are more than a dozen local rock bands “who are producing very, very good music right now.”

Kennedy and Frye launched the Asheville Rock Collective with an aim of leveraging the efforts and talents of the local rock community. Frye says that the primary goal of the loose aggregation of like-minded artists is to “expose the scene to a national audience.”

The collective is a very new venture. Last November, Frye hatched the ideas of some kind of organization, and Kennedy had begun thinking about staging a concert series at Pisgah Brewing. “We launched our ideas at the same time,” Frye admits, “and they clicked.”

From the beginning, the concept of the collective was to be built around the live experience. “The live energy is definitely important,” Frye says. But while one of the collective’s first initiatives is to create a CD compilation of local rock artists, there are no plans to book time in any of Asheville’s recording studios.

“A lot of these bands are practicing in their basement, recording stuff on their phone or their computers,” Frye says. “They don’t have access to recording studios.” He believes that live recording with a good system is the best way to go. “We’ll capture the two best songs from each band,” he says. In the meantime, interested parties can look up “Asheville Rock Collective” on Spotify to hear a selection of demo recordings from the local rock acts.

If plans go as scheduled, the CD will be complete and ready for distribution in April. At that point, Kennedy says that the Asheville Rock Collective will send copies to ten indie record labels, and the same number of radio stations and music-focused publications. And he has high hopes. “I’m a big daydreamer,” he says. Recalling a (quite possibly apocryphal) story of how Tom Petty and the Heartbreakers simply walked into a record label with a demo tape and got signed, he says, “I think of some of the rock bands here in Western North Carolina, and I’m like, ‘Why don’t they have a bigger audience? They’re amazing!’”

The collective isn’t an exclusive club; the quality that unites all of the artists involved is a commitment to rock. “We’re not trying to make a gang out of this,” Kennedy emphasizes. He says that the collective is designed to support “people who are involved and passionate about blues rock, hard rock, punk rock, indie rock.” To local artists with a similar music focus, he offers this promise: “We’ll be your megaphone,” he says. “We’ll draw attention to you as much as we can.”

“We’ve got kind of a bad attitude,” Kennedy says with a laugh. “No Dead. No folk. No bluegrass. No jam.” But he does prefer to frame the collective’s mission in a more positive light. “If you have intensity, if you’re producing original music that is really true to yourself, we’ll back that all day long.”

Riffing on an old aphorism originally coined to describe a very different kind of music, Duke Frye sums up the kind of music the Asheville Rock Collective aims to support: “Three chords, intensity and the truth.”