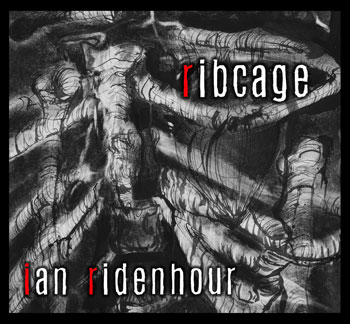 One of Western North Carolina’s most accomplished musicians is also one of its youngest. Ian Ridenhour has been busily writing and recording music for years; Ribcage is the third collection of songs from the 17 year old singer, songwriter and musician.

Ridenhour’s full-length debut was 2014’s Quietly Making Noise; that 14-song album showed his deep and wide-ranging creativity, channeled through a sensibility that drew from classic pop as well as modern-, indie- and post-rock influences. But try as he might on that set of songs, he couldn’t help but sound like what he was: a youngster.

The occasionally fussy approach to arranging that characterized the still-developing talent of four years ago has given way to a more self-assured methodology. On Ribcage, Ridenhour seems less concerned with displaying the breadth of his talent, and more comfortable with exploring its depth.

What that means in practical terms is that Ribcage is a more musically focused collection of songs, one that helps listeners develop a sense of Ridenhour’s rapidly coalescing musical personality. The six-song release opens with “Stay Awake,” a hypnotic, slow-burning funk stomper with occasionally angry, even petulant lyrics. If Mayer Hawthorne were less retro-minded, he might come up with a tune like “Stay Awake.”

“Ha! Ha!” is sharp-edged piano pop a la Ben Folds, with more than its share of subtlety. Ridenhour makes effective use of musical shade and light; he’s unafraid to take a cue from progressive rock, veering deftly between quiet, near-silent passages and loud, raucous bits. But he wraps it all inside a catchy melody.

“Waiting for the Sun” is a radio-ready tune; though its melody and arrangement seem more than a little familiar, such where-have-I-heard-this familiarity is often a key to winning over new listeners. And on that level, “Waiting for the Sun” should succeed. Listeners will have to pay close attention to appreciate it, but the song also provides a showcase for Ridenhour’s impressive skills as a lyricist.

There’s a jazzy feel to “Bones of Me.” Ridenhour employs both acoustic and 1970s-flavored electric piano on this soulful number. Like “Ha! Ha!” it alternates between two very different musical approaches, and ultimately rocks more than is typical of a keyboard-centered tune.

The sophisticated “Exoskeleton” opens with a tasty bass guitar line quite reminiscent of – but at a legally safe distance from – the Jackson Five’s “I Want You Back.” The song’s arrangement places Ridenhour in a musical setting the likes of which Bruno Mars (or even Ray LaMontagne on the right day) would find comfortable. The tune’s horn chart work recalls Quietly Making Noise, but shows just how far Ridenhour has traveled musically in the years since making his debut album.

Ribcage closes with “You Help Me Fall Asleep,” a track that was first released as a single in December. The tune manages to fold in all of Ridenhour’s many musical virtues – musicianship, songwriting, arranging, vocals and lyrics – into what is by far the most sweeping and ambitious tune on an already superb EP.

At under 24 minutes, Ribcage delivers less quantity than the average album (that’s why it’s billed as an EP), but in terms of quality, it’s not lacking in the least.