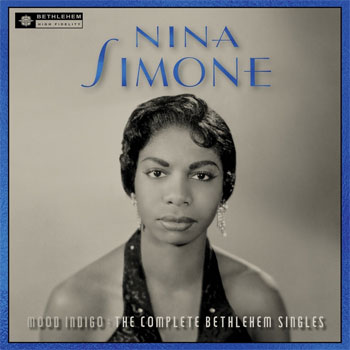 Nina Simone (born Eunice Waymon) was a classically-trained pianist; she didn’t set out to be a jazz singer. Born in Tryon, N.C. in 1933, she was a musical prodigy, and would study at Juilliard. Her application for further studies at the Curtis Institute in Philadelphia was rejected, so she continued studying piano on her own. When she scored a piano-playing gig at the Midtown Bar and Grill in Atlantic City, N.J., she was promptly told by the owner that she had to sing as well; otherwise she’d lose her job.

Relying on the wealth of material she had learned – standards, classics, pop tunes – Simone quickly developed a style of her own, one that could often sound like two completely separate pianists playing at once. That quality would shine through on her debut recording, a 1959 (some reports say 1958) album on Bethlehem Records titled Little Girl Blue. Notably, at least one version of the album – which was issued a number of times with varying artwork and differing track lists – didn’t feature that title on its cover; instead was the description: “jazz as played in an exclusive side street club.”

While that was a clumsy marketing phrase, it would fairly accurately describe the contents of Little Girl Blue. The LP featured Simone on piano and voice, backed by drummer Al Heath and bassist Jimmy Bond. Simone sold the rights to the recordings to Bethlehem, and though she couldn’t have known it at the time, that decision meant that more than $1,000,000 in royalties eventually redounded to the label instead of her.

A June 1959 single was issued, “I Loves You Porgy,” Simone’s reading of a George and Ira Gershwin tune from their 1935 musical Porgy and Bess. Sales were good, and so Bethlehem would go on to release every one of the 14 songs cut in the session as singles, either A- or B-sides. And in at least one case, the single version of a song was a completely different take than the album version.

Because she had sold her rights away, Simone had no say over the singles issue campaign, and didn’t receive profits from it. She would never again record for Bethlehem; instead she signed with another label, Colpix, who initially treated her only marginally better.

In 2018, fifteen years after the artist’s death at age 70 – all of the singles from Simone’s Bethlehem sessions have finally been brought together in a collection called Mood Indigo: The Complete Bethlehem Sessions. In addition to sourcing the audio from the monaural masters, archivist Cheryl Pawelski (who’s also the head of Grammy-winning Omnivore Recordings) commissioned an excellent liner note essay from fellow Grammy winner and musicologist Ashley Kahn. Kahn’s essay puts the Bethlehem recordings into their proper musical and historical context.

On this singles collection, Simone works her way through a collection of songs from Rodgers and Hart (the standard “Little Girl Blue”), Count Basie (a spare reading of the big band “Good Bait”), Rodgers and Hammerstein (“You’ll Never Walk Alone”) and two originals (“African Mailman” and “Central Park Blues”). The song selection displays Simone’s mastery at bending various styles to her own particular musical approach. And Simone’s rural Carolina roots show through even in the urban jazz idiom as she plays and sings the gospel favorite “He’s Got the Whole World in His Hands.”

At times Simone’s approach borders on the classical; other times it’s ambitiously jazzy. And when she digs into “My Baby Just Cares for Me,” she brings together all of her vocal and pianistic virtues, applying them to a song that’s both bouncy and romantic.

Nina Simone’s goal with the Bethlehem session – and the first few that would follow – was the same as her motivation for taking the bar gig in Atlantic City: simply to raise the funds to continue her classical training. Perhaps sadly for her, she never did return to her studies. But as this collection of her earliest recordings makes plain, listeners have been (and continue to be) enriched by the ultimate decision she made.