Dixie Dregs Answer the Question, “What If?” (Part One)

Atlanta (by way of Augusta and Miami) band the Dixie Dregs were among the most boundary-pushing acts of the 1970s. Deftly blending styles from hard rock to jazz fusion to country, the instrumental quintet released an impressive string of albums on Macon-based Capricorn Records. In later years, the band would flirt with different directions – even adding vocalists – and endured a number of lineup changes. Though the Dregs never actually broke up, they would release only one studio album after 1982’s Industry Standard LP. But in 2018, the group has reassembled with the lineup that made 1977’s Free Fall, its first major-label release. And for the first time in more than 40 years, that celebrated lineup takes to the road. Drummer Rod Morgenstein brings things up to date. 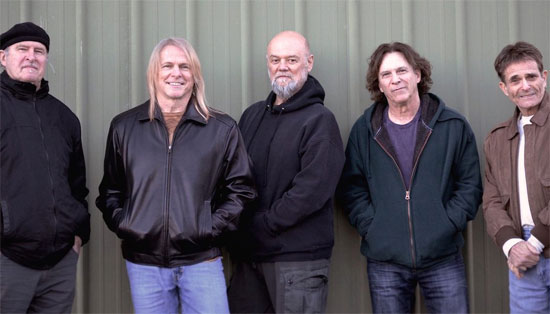 How difficult was it to reassemble the 1975-era members for a tour?

The tricky part was contacting Steve Davidowski, who was the keyboard player from the 1975 version of the band. But [bassist] Andy West was able to locate him, and he expressed interest. Everything, really, has come together very smoothly. I live in Rhode Island, but 30 weeks a year, I make the trek up to Boston from my home. I’ve been teaching at Berklee College of Music for these 20 years. When I’m up there, for two nights, I live with Frank Solomon, who is the manager of the Dixie Dregs. And invariably, our conversations all these years are about music. We’ve always talked about, “Wouldn’t it be unbelievable if the original version of the band was able to get together to do something?”

And so, in January of last year, the five guys decided to convene at [guitarist] Steve Morse’s house for a couple of days, just to see what it felt like playing music together, hanging together as old friends and people who worked together four decades ago. We ended up having a wonderful time together, and everyone’s still playing really well.

Right. I’ve been a full time musician my entire life, as has Steve [Morse], and also Steve Davidowski. Andy and Allen [Sloan, violin] went on to other professional careers. Allen is a doctor: a bonafide pain medicine doctor. He owns a huge practice in North Augusta, South Carolina. Andy went into IT and has been a computer guy for the last 30 years, but he has also always kept up with doing music.

What were the rehearsals like? Did everybody remember how to play the songs?

What we did was agree to just learn five or six songs to play through them, and we didn’t even set up in a stage concert setting. We just did it very low-key, playing at relatively quiet levels, just to see if everybody could remember all these involved parts, and play in time, and play in tune. And it was way beyond; everybody in the band is so talented on the instrument that they play.

In December, Andy and Steve Davidowski traveled to Allen Sloan’s home to spend four days in rehearsal, running through all of the songs between the three of them. And then, in January, I had some shows with my band, Winger, and our last show ends in Scottsdale, Arizona. That’s where Andy lives, so I stayed an extra day to do a rhythm section rehearsal with him, and run through everything. And then, about a week or so before the tour began, we had a full-on rehearsal for several days to run through everything, working out the kinks as far as the music, the gear, and our road crew.

Jeff Burkhart is going to be our tour manager and lighting person. In our early years, there was a really cool rock club in Blowing Rock, North Carolina called P.B. Scott’s. It was a geodesic dome. One of the times that we played there, Jeff expressed an interest in going on the road. So, we said, “We’ll hire you for $75 a week.” That’s all that we could afford. So he took an interest in lighting and became such a good lighting designer. After he left the Dregs, he went on to do acts like Journey and Shania Twain. He became one of the best in the business, one of the most sought-after lighting people.

For the tour, will you be focusing exclusively on material from the Capricorn era — Free Fall through Night of the Living Dregs — or will you be drawing from later releases like the three early ’80s Arista albums as well?

There was a period in the ’80s where the band members kind of went their separate ways, and then got back together in different versions. But the two guys who were always in it were me and Steve Morse. With there being so many different versions of the band, when we were talking about songs that we might want to do, it was like, “You know what? Let’s go through all these albums and see what songs haven’t been done in ages,” or “Are there any songs that we don’t even remember having ever played live?” So, it’ll be a very interesting mix.