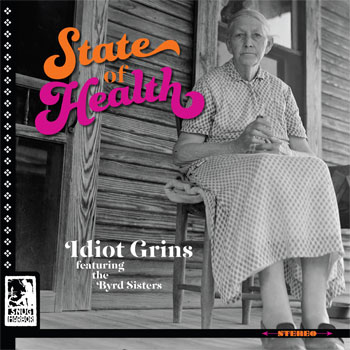 Isaac Hayes and Curtis Mayfield made some of the most enduring cinematic soul of the 1970s. Not coincidentally, both men created works that lent themselves exceedingly well to juxtaposition with onscreen images; Hayes composed the soundtrack to Shaft; Mayfield did the same for Super Fly. Of course their work transcended soundtrack music, but the connection between the music they made and visuals would be striking and indelible.

As is always the case in popular culture, tastes changed, and that brand of cinematic soul fell out of favor as listeners moved ion to the next thing (and the thing after that). But the influence of that style never fully went away, and in keeping with pop music’s predilection for circling back on itself, there’s a welcome resurgence in that kind of music today, one that illustrates that there is, in fact, plenty left to express withing its context.

From the Bay Area comes Idiot Grins. Chugging beats, rubbery wah-wah pedals, slinky female chorus, punch horn section and keening analog synthesizer lines: all of those qualities and more are found withing the deep grooves of State of Health. The group released its debut, Quarry, in 2010, following that up with 2015’s Big Man. Near the end of 2017 the 12-cut State of Health was released.

Those predisposed to scoff at retro-minded releases are advised to keep moving; nothing for you to hear here. The rest of us will derive more than enough pleasure from these kinetic cuts to more than make up for (and offset) your disdain. There may not be anything new abut Idiot Grins’ approach to making music, but the tunes themselves – and the manner in which they’re delivered – are top-notch.

Most of the songs are uptempo ravers just begging for a film (but not needing one). But when the band dials things down, as on the simmering “Philly Belly Cheesy,” it’s clear that Idiot Grins possess a great deal of nuance and spirit. Lead vocalist Evan Eustis has a voice for the ages – one designed to sing this kind of material – and the Byrd Sisters’ soulful vocal harmonies are the icing on the cake.

Don’t be put off by the red-herring album cover art; it’s the only misstep associated with the otherwise sure-footed release. If your tastes run along the lines of Hayes, Mayfield, Dennis Coffey and other purveyors of deep-groove funky soul, State of Health should be your next purchase.