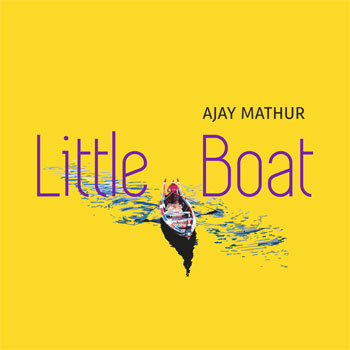 In the years just before punk broke in the UK, there was a musical scene bubbling under that would exert an influence on punk while (quietly) providing a bridge between mainstream rock and its more jagged variant. Like garage rock and freakbeat, the scene didn’t really have a name in wide use at the time; its lable was coined later by musicologists and record collectors. Pub rock was the name given to the music made by acts like Brinsley Schwarz and Ducks Deluxe; its blend of melodicism, subtle country elements and a solid beat wold inform the sounds made later by Elvis Costello and his contemporaries.

Pub rock also drew from other musical traditions, folding them into the mix. And it’s somewhat unexpected that someone would be making a kind of modern pub rock well into the 21st century, but here we are: Ajay Mathur is from Switzerland, though you’d never knowing it listening to the music on Little Boat. “Forget About Yesterday” mixes in Indian percussion and the “Bo beat” (think “Willie and the Hand Jive” of “Bo Diddley”).

Mathur’s soaring vocal harmonies and acoustic-centered rock tunes sometimes suggest the late ’70s work of Al Stewart, but Mathur makes a point of mixing in a dizzying variety of directions. “Grooving in Paris (All My Choices)” has elements of spy-movie soundtrack music, Pariisan café jazz and stomping, singalong rock, all in under four minutes. And the album’s title track spins out an simple yet infectious lea guitar line that suggests the windswept sonic vistas of some of Dire Straits’ best work.

Listeners seeking a cohesive, consistent-sounding set of tunes might be a bit perplexed by the wide musical net cast on Little Boat by Ajay Mathur. One moment it’s pub rock; the next it’s something else entirely. But those open to variety will find much to appreciate on this album.