Amigo: Fun ‘And Friends” at the Fidelitorium

Charlotte-based country rock trio Amigo has seen its profile raised this last year. The group was named Best Gram-Parsons-Loving-Country Rock Band in 2017, and they recently completed their second full-length release, And Friends, recorded with producer Mitch Easter at his Fidelitorium Recordings in Kernersville.

With And Friends, Amigo continues to build on a foundation that draws from country, rock and country-rock (and much more than just the work of Gram Parsons). The album benefits from a more streamlined and focused approach to the studio than the group employed for Might Could, its 2014 debut album. 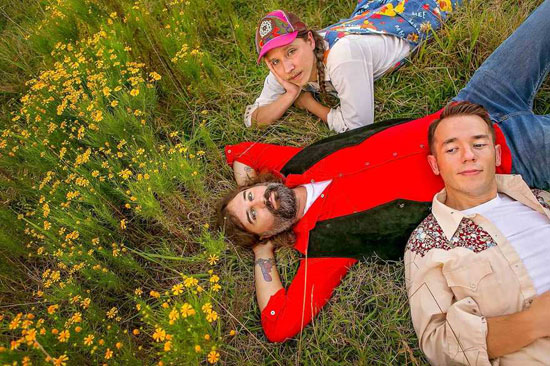 While the band’s music is credited to the whole group – guitarist Slade Baird, drummer Adam Phillips and bassist Thomas Alverson – it’s Baird who comes up with the words to Amigo’s songs. And he does the interviews as well.

Listening to And Friends, I detect the influence of groups like Moby Grape and Poco, and even All Things Must Pass-era George Harrison. What all of those have in common is – to some extent, at least – a rock foundation with a country sensibility. Does that describe Amigo as well?

I grew up in the South, but I didn’t grow up listening to that kind of music. I listened to classic rock radio. But once I really started digging into rock ‘n’ roll records, the sounds of that era captured my imagination in the same way that movies from that time do. There’s a warmth and a certain kind of tonal color palette that just feels like home to me. And I don’t know why that is.

But yeah, that’s exactly what we’re going for: that early-70s sweet spot where young rock musicians were really connecting with the classic country sound.

How did your approach making And Friends differ from the way that you’ve made your previous recordings?

The three of us have been playing together now for four years in the current lineup. But when we went in for the first record, we were a new band and didn’t have a consistent lineup. So we used the more modern studio approach where we tracked one [instrument] at a time.

Making And Friends, we did a lot more live. We recorded with Mitch, and we were more confident going into this one. We wanted to let our live sound come through, let our personality as a band take the center stage, and make it sound like us.

How did Mitch Easter’s involvement with making And Friends affect the finished product?

I think that the thing that really stands out from working with him is just how at ease he made us; we immediately felt comfortable. The place is in the middle of a tobacco field; you just feel like you’re in the middle of nowhere. So you just roll up your sleeves: “All right. I’m gonna be creative for a whole week here!”

When I listen back to And Friends, there’s an ease. Mitch’s demeanor makes making rock ‘n’ roll fun, and I think that comes out.

Nearly all of the songs on the album are originals, but you cover John Prine’s “Everybody.” The way you play it reminds me of Jason & the Scorchers’ reinvention of Bob Dylan’s “Absolutely Sweet Marie.” When you choose a song to cover, is the goal to change it around and make it your own?

It’s exactly like that, but…well, I’ll just tell you how we ended up doing that song.

I was writing a song, and it was a fast tempo country rocker. I was getting really excited about it, and I was just about to start writing lyrics. And then I realized that it was the melody to “Everybody.” So I was like, “Well, fuck it. I’m not gonna try to rewrite this song. I’ll just cover it.”

The title of “(When I Fool) You (Into) Loving Me (Again)” makes really awkward use of parentheses. And on Might Could, you did something similar with the Kinks-like title of “Where Have All the Bad Times Gone (To)?” Are you just having fun with punctuation and syntax, or is there something deeper at work there?

That song is a showcase of the band’s versatility. It sounds like the kind of tune that a higher-profile country or country rock act could cover. Have you ever pursued the idea of selling songs to Nashville?

Well, no. Every song I ever write, it’s for Amigo. That’s what we’re all pouring our hearts into.

But if somebody wanted to purchase the rights to one of my songs, they are certainly welcome. Put my address in the interview.