Quite possibly the Great Lost Syd Barrett/Pink Floyd track, the existence of “In the Beechwoods” was confirmed around 2001, when persons unknown leaked a cassette dub of the instrumental track to an online fan group. That version suffered from poor audio quality and featured drummer Nick Mason introducing the track (perhaps inaccurately) as one of the last things Pink Floyd did with Syd. Included in high fidelity on The Early Years 1965-1972, it displays not only Syd’s knack for a strong melody, but his inimitable guitar style (not to mention some thrilling keyboard textures from Rick Wright). Had the band finished it with lyrics, “In the Beechwoods” could have been one of the best Syd-era Pink Floyd tunes ever.

One of the last fruitful recording sessions Syd did with Pink Floyd yielded this autobiographical track. Long circulating on bootleg, it would go unissued, though the compilers of the 1988 compilation Opel had planned to include the track (Pink Floyd vetoed it). “I always was rather cross that they wouldn’t let those things go out,” Peter Jenner says. “Although they weren’t flattering to Syd, I think they were brilliantly wonderful pieces of work in a sort of psychotic way.” Jenner compares “Vegetable Man” to some of Vincent Van Gogh’s paintings. “There’s a sort of crazed, sort of wondrous quality; there’s something about that it told you about his mental condition.” Two versions of “Vegetable Man” are included on the 2016 boxed set The Early Years 1965-1972; a live version for BBC Radio includes a vamp that sounds a lot like Neil Hefti’s “Batman Theme.” Robyn Hitchcock notes that before the Soft Boys covered the song, two other British groups – The Mothmen and The Jesus & Mary Chain – did so. 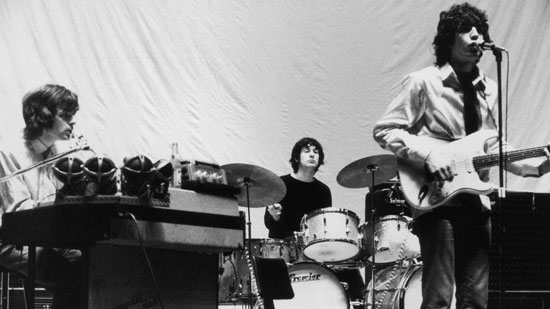 The making of each of Syd Barrett’s post-Pink Floyd solo albums would prove problematic. Sessions with producers Peter Jenner and Malcolm Jones had both broken down; his ex-band mates came in to help steward Barrett toward making a cohesive album. Cobbled together from basic sessions with Soft Machine’s rhythm section, “Octopus” is among the most conventional and accessible tunes on The Madcap Laughs. Despite its loose-limbed, ramshackle execution, it’s as close in both spirit and delivery to his Floyd-era work as Barrett would ever manage after going solo. The track would be released as a single, and Barrett discussed it in one of his rare interviews from that time: “I like to have really exciting, colorful songs. I can’t really sing. But I enjoy it and I enjoy writing from experiences. Some are so powerful they are ridiculous.”

For “Golden Hair,” producer Gilmour made the decision to present Syd in (nearly) unaccompanied fashion. The haunting, spare arrangement of the song demonstrates both Barrett’s substantial musicality and evidence of his decline. Barrett strums a single melodic line and sequence of sympathetic chords on his acoustic guitar while singing lyrics cribbed from a 1907 James Joyce poem of the same name. Though no other musicians are credited on the track, a bit of subtle, understated organ and vibraphone help hold the tune together. That accompaniment – along with some unused electric guitar and vocal harmony overdubs – can be heard on an outtake from the Peter Jenner sessions, included as a bonus track on CD reissues of the album. The sessions also marked the debut of the then 23-year-old David Gilmour as a producer. Humble Pie drummer Jerry Shirley was involved in some of the sessions for The Madcap Laughs, and had the opportunity to watch his friend work behind the recording console. “Dave had already grasped what it took to be an excellent engineer and then producer,” Shirley says. “He was learning as he went. I’m sure that whole experience was a huge learning curve for him.”

Paradoxically – considering that his mental condition was worsening – Syd Barrett’s second and final solo album is a much more “together” collection of recordings than The Madcap Laughs. Jerry Shirley recalls that much of the album was recorded with him on drums, David Gilmour on bass, Rick Wright on keyboards, and Syd on guitar and vocal. “Sounds like a pretty good band, doesn’t it?” he says. “We got a couple of really good things; ‘Gigolo Aunt’ was a live take.” Though the released version is noted as Take 15, Shirley is convinced an earlier run-through was used. “I think they ended up going back to one of the first takes we did of it,” he says, “because it was almost perfect…which was unheard of!”

The playful, almost nursery rhyme-styled “Effervescing Elephant” was a song Barrett had written many years earlier but never used. Producer David Gilmour rescued the tune – documented in one of Syd’s last fruitful recording sessions – from obscurity. Drummer Willie Wilson played on both Barrett solo albums, and recalls Gilmour’s method of coaxing music out of Syd. “Dave had all these tapes of Syd playing songs, and he remembered quite a few songs of Syd’s that hadn’t been recorded,” Wilson says. “Dave sat with Syd for quite some time saying, ‘Look, do you remember this one? It went something like this. You must.’” Barrett included the song in his only live post-Pink Floyd live performance, backed by Gilmour and Jerry Shirley; that abortive set has never seen official release.

After the Barrett, sessions, more than four years would pass before Syd would return to the recording studio. An August 1974 session at Abbey Road Studios in London – with Jenner supervising and John Leckie engineering – yielded nothing of use. Barrett would not be heard from on record again; after years living quietly in Cambridge, he passed away in July 2006.