When viewed against the backdrop of the influence he would exert upon popular music, Syd Barrett’s recorded body of work is remarkably small. The earliest studio session of which he was a part took place in very late 1964, when his band was still called The Tea Set. Those sessions would be followed up in early 1967 by the first few Pink Floyd singles, and the band’s debut album The Piper at the Gates of Dawn, recorded through spring of that year. By February 1968 Barrett had been ousted from the group he founded, though he would go on to cut a pair of solo albums, The Madcap Laughs and Barrett. Save a one-off performance for BBC radio, those sessions effectively marked the end of Barrett’s studio work. Outtakes and scraps from his solo albums were later collected on Opel. And perhaps the most legendary Barrett track of all, “Have You Got it Yet?” was likely never committed to tape.

Taken together, Syd’s known and published compositions and co-writes total roughly fifty songs. Picking the ten “best” Barrett songs is no easy task; once he started writing for Pink Floyd, Barrett maintained a consistently high standard of songwriting. It only began to flag as his mental state deteriorated. But despite the conditions under which they were recorded, his solo albums contain many cracked gems, some the equal of his work for Pink Floyd. Rather than ranking the finest among Syd Barrett’s songs, they’re listed here in roughly chronological order. 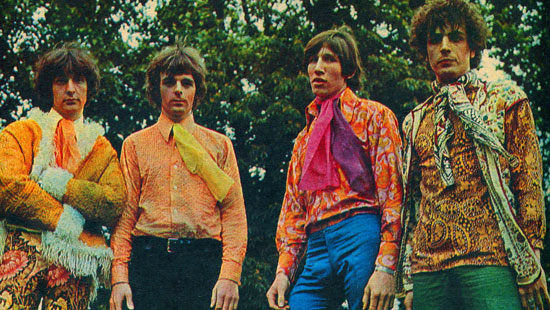 A pop song about a transvestite-thief was considered pretty racy stuff in 1967’s England. In fact, though it briefly reached #20 on the UK charts, “Arnold Layne” was (sort of) banned. Today, it is often mistakenly assumed that the BBC banned “Arnold Layne” because of its subject matter; in truth, it was the more commercial-minded “pirate” radio station Radio London (broadcasting from a ship in the North Sea) that would refuse to play the single. Songwriter and Barrett fan Robyn Hitchcock recalls hearing “Arnold Layne” for the first time at age 14: “My cousin lent me his portable, battery-operated record player and radio; he had it and a copy of ‘Arnold Layne.’” Hitchcock – who would record a cover of “Vegetable Man (see below) with his band the Soft Boys, and take part in an all-star 2007 Barrett tribute in London – says the first song he learned on guitar was the “Arnold Layne” b-side, “Candy and a Currant Bun.”

“Interstellar Overdrive” from The Piper at the Gates of Dawn
recorded March-April 1967, produced by Norman Smith

Pink Floyd would record several versions of this tune, built around a Syd Barrett riff “inspired” by Love’s reading of the Burt Bacharach/Hal David tune, “My Little Red Book.” In live performance, “Interstellar Overdrive” took on an epic quality; even on record, it’s quite lengthy by 1967 standards. The track features a sustained musical freakout, and captures Pink Floyd’s improvisational side, balancing out Syd’s ditties full of childlike wonder that characterize most of The Piper at the Gates of Dawn. The band’s first manager, Peter Jenner says that the song helped establish the direction of Pink Floyd’s live performances. “It was just that one riff, really,” Jenner says. “And then they improvised it from there on in. That was the absolute backbone of their initial year or 18 months.”

“Astronomy Dominé” from The Piper at the Gates of Dawn
recorded April 11-13, 1967, produced by Norman Smith

In the wake of the staggering success of The Dark Side of the Moon, Pink Floyd’s record label repackaged the group’s first two albums in a 2LP set called A Nice Pair. But that set substituted the original studio recording of “Astronomy Dominé” with a live version from 1969’s Ummagumma, featuring David Gilmour instead of Barrett. Both versions are superb, but the studio version – featuring manager Peter Jenner on megaphone vocals – is Syd’s Pink Floyd at both its freakiest and most accessible. Though Jenner’s spoken part seems to come from another dimension, the source of the words would be rather mundane: “That was just an excerpt from half a page of an encyclopedia-type thing about space,” he says. Guitarist Steve Howe – then in the group Tomorrow – was drafted to fill in for a missing Barrett one night at a show, but then Barrett showed up in time and his services weren’t needed. But he saw Pink Floyd many times in those days. “The songs on the records were very well-crafted,” Howe says, “but when Syd got on stage, he ad-libbed a lot more across the music. And I imagine that’s what I would have done. I would have just bluffed my way through it and enjoyed it.”

One of the earliest tracks recorded after signing with EMI, “See Emily Play” made the most of studio technology. Thanks to producer Norman Smith’s experience working alongside George Martin on Beatles recording sessions, Pink Floyd had a relatively sympathetic ally for its musical excursions. Rick Wright’s sped-up piano solos sound like wind-up toys, a perfect touch to complement Barrett’s lyrics about playtime. Avid Barrett fan David Bowie would cut a version of the song in tribute to Syd on his all-covers 1973 LP Pin Ups. Years after the song’s release, the Rock and Roll Hall of Fame named “See Emily Play” among its “500 Songs That Shaped Rock and Roll.” Craig Bailey, host of the popular syndicated radio series Floydian Slip says that “Emily” and other Barrett songs of the era are “quintessential late ’60’s British pop that created the stereotype of that type of music.”