Marillion: To Prog or Not to Prog? (Part One)

The heyday of progressive rock was the period 1971 to 1976; while suggestions that punk “killed” the genre are wishful thinking on the part of prog’s detractors, it’s true that the genre fell somewhat out of fashion as the 1970s played out. But prog never really went away; it simply mutated, developed and combined with (or at least informed) other musical styles.

Marillion first came together in 1979, in Aylesbury, a small city some 50 miles northwest of London. Those who didn’t know better could be forgiven for assuming the band was a bunch of hirsute proggers;after all, they derived their name from a J.R.R. Tolkien book. But in fact progressive rock was merely one style that informed the original music of Marillion.

The band released its first album, Script for a Jester’s Tear, in 1983. At that point Marillion featured a lead vocalist and lyricist known as Fish. Fish was still the front man of the band at the time of its third (and for many year, best-known) album, Misplaced Childhood was released. That album was the first – and, as fate would have it, the last – Marillion album to make it into the top 100 albums on Billboard’s chart. A single from the album, “Kayleigh,” made it to #21 on the U.S. Mainstream Rock chart, and a video for the song was a fixture of MTV around that time.

Due to conflicts with band management, Fish left Marillion in 1988. With the loss of its most high-profile member, the band could have made the decision to call it a day. Instead, they brought Steve “h” Hogarth on board as a member, completing an album (1989’s Seasons End) that was already in progress. 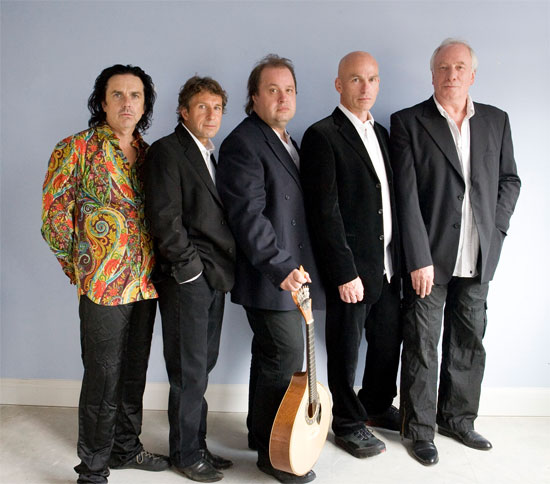 Marillion’s connection – however tenuous to begin with – to the progressive rock scene would become even less pronounced with Hogarth on board; his musical background had more to do with new wave and melodic rock than high-flying conceptual masterworks. But the lingering effects of the band’s sometimes prog-leaning sound would still inform the music made going forward. As a result, Marillion Mark Two (so to speak) crafts a sound that is once ambitious and accessible. And with Hogarth joining the group’s four longtime members (guitarist Steve Rothery, keyboardist Mark Kelly, bassist Pete Trewas and drummer Ian Mosley), Marillion would go on to make more than 20 albums.

The group’s latest release is 2016’s Fuck Everyone and Run (FEAR). And though the group members continue to take issue with the progressive rock tag that’s still often applied to their work, three of the new album’s six tracks are extended, multi-part suites. And there’s even something of a conceptual theme to the record.

“I’ve been flatly denying that we’re progressive ever since I joined the band,” says Steve Hogarth with a hearty laugh. “But now we’ve got so many prog awards in the office that it’s futile.” Marillion was named “Band of the Year” at the 2013 Progressive Music Awards, and “UK Band of the Year” at 2017’s ceremony. So the prog label seems inescapable.

“We’re all over the place in terms of what turns us on as individuals, and I think those sensibilities always work their way into what you do,” he says. But Hogarth stresses that Marillion doesn’t collectively think much about the work of other artists when creating its own music. “We just jam around,” he says. “We scratch around in the dark for something that maybe we’ve never done before, and hope we can find it.”

But lest he protest too much, Hogarth concedes that he understands why the band he’s fronted for nearly three decades is so often labeled a prog group. “They have to have a place to stick the music in the rack or something,” he says. “I mean, clearly, we’re not electronica. We’re not really a pop group, but we have those elements as well. There’s electronica in what we do. We’ve written pop songs. So, we don’t really sit too comfortably in any of the genres.”

When it’s noted that Steven Wilson – widely hailed as the current god of all things progressive – bristles at the prog label as well, Hogarth concurs. “I know Steve has the same problem. I went up to his studio the other day to listen to his latest 5.1 remix project, and he’s got loads of pictures of ABBA in his control room.” With a chuckle, he adds, “There wasn’t any King Crimson in evidence.”