The genre of country rock has its origins in west coast bands of the late 1960s, including late-period Byrds, the Flying Burrito Brothers, Buffalo Springfield and Poco. And while perhaps the biggest claim to fame enjoyed by Poco is its reputation as a kind of “farm team” for big-league, higher-profile acts, the band co-founded in 1968 by pedal steel guitarist Rusty Young has amassed an impressive body of work. Though he describes himself as semi-retired, Young recently released a solo album, Waitin’ for the Sun. And he still leads a lineup of Poco today.

The earliest lineup of Poco, as showcased on the group’s debut album Pickin’ up the Pieces, featured Young along with Richie Furay and Jim Messina (both from Buffalo Springfield), Randy Meisner and George Grantham. By the early ’70s, Messina had left, replaced by guitarist Paul Cotton; bassist Meisner, too had left, and his place was taken by Timothy B. Schmit.

Messina went on to form a successful duo with Kenny Loggins, enjoying several hit albums and singles including “Your Mama Don’t Dance.” Meisner and Schmit both eventually landed in Eagles, perhaps the most successful of all country-leaning rock bands. “I do wish the [original] band could have stayed together more,” Young admits, noting that the first lineup didn’t even last through the making of that first album. 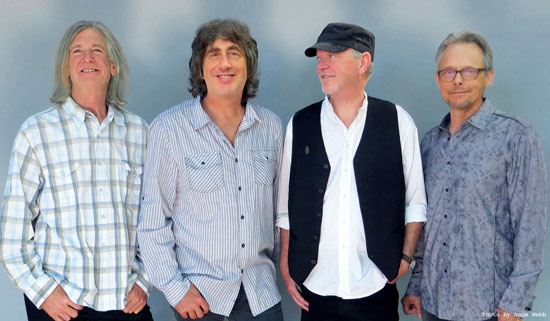 But Young isn’t bitter about the way things went. “I’m proud of how the guys went on,” he says. “I always believed in those guys a lot, and so when they went onto that kind of success, it made me feel great.”

Meanwhile, Rusty Young kept the Poco fires burning. He guided the band through many lineup changes, and is the only musician to appear on every one of the group’s more than two dozen albums. By 1978, he was the sole remaining original member, leading the band as it enjoyed some of the biggest hits of its career. “Crazy Love” and “Heart of the Night” (both from 1979’s Legend LP) rose high on the singles charts in both the U.S. and Canada.

Young announced his retirement from performance in 2015 (“that was the plan,” he says with a chuckle), but apparently he couldn’t stay away. “I wasn’t gonna completely retire,” he says today. “I just wanted to do things that were fun, like going out and playing with my friends like Jimmy [Messina] and Richie [Furay], and maybe a Poco show here and there.” And he’s been doing that ever since; Poco’s January 20 show in Saratoga kicks off a string of more than fifteen shows for Young, either with the band, solo, or with some of those friends.

Young recalls a fan who approached him backstage after a show not long ago. “He said, ‘Have you ever thought about doing a solo record? I’ve got a label, and we’d love to sign you.’” In all his years as a professional musician, Young had never made a solo record, so he agreed. Waitin’ for the Sun displays both his skills on pedal steel guitar and his songwriting. And it features a familiar cast backing Young on its ten tracks.

The current members of Poco all play on the album. “They’re the best musicians I know,” young says. “And we’ve played together so much, whatever I’m thinking of, they know how to play it.” And several of Young’s former band mates guest on the record as well, including all members of the band that made 1969’s Pickin’ Up the Pieces.

Poco’s live shows feature several of Young’s solo songs, but for the most part the concerts focus on the hits. “We’re doing the songs that people come to the show are expecting to hear,” Young says.

Over the years, Young’s role within his band has changed. He says that early on, his job was “to provide all those background instruments.” These days, he focuses on writing songs, and singing. “But yet, I still play dobro, mandolin, lap steel and guitar in the band,” he notes. “I’m a better musician than I was back then. And these guys that I’m playing with in Poco are as good as, or better than, anyone I’ve ever played with.”