Album Review: The Rough and Tumble — We Made Ourselves a Home…

The Rough & Tumble is the folk-Americana duo of Mallory Graham and Scott Tyler. These days the pair consider themselves at home on the road, but in the Rough & Tumble’s bio, the nomadic pair say that they “used to say they were from Nashville.” And before that, Graham (who was born in Pennsylvania) and Tyler (originally from California) got their musical start in Black Mountain, N.C.

Beginning in 2011, the duo recorded a string of EPs; the most recent is a 7-song collection, 2017’s Cardboard and Christmas Lights. Recorded in Nashville, The Rough & Tumble’s first full-length album, We Made Ourselves a Home When We Didn’t Know features nearly all new material; only one tune, “Take Me With You,” is recycled from last year’s EP. The album was released February 9 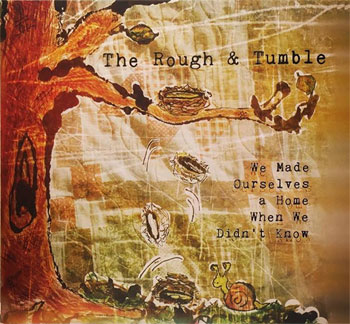 The duo’s sound is clean and straightforward, placing the vocals of Graham and/or Tyler front and center in the mix. But The Rough & Tumble doesn’t shy away from studio techniques like vocal overdubbing; the disc’s opening cut, “Wildfire,” features multiple tracks of Graham’s supple voice (with a subtle bit of Tyler mixed in) atop an instrumental backing that features little more than plucky banjo and what sounds like either accordion or harmonium, and bits of tinkling bells and bass drum. Those elements are all that are needed to create a sympathetic soundscape for the vocals.

The more uptempo, countrified “Complications” employs a more pop-leaning arrangement, with bass guitar and a small (but full) drum kit providing solid rhythm section backing. Even when the pair’s lyrics take an occasional turn toward the melancholy, there’s a sunny sense of underlying happiness (or at least optimism) that leavens the vibe. And the voices of Graham and Tyler – both of which avoid the affected, mannered tone so prevalent in much of today’s Americana – combine seamlessly.

The romantic “Barney” is a showcase for The Rough & Tumble’s favored sonic approach: the subtle instrumentation is both note-perfect and essential to the song, but it’s delivered in a manner than never competes with the singing. “Viroqua, WI” is a road song; whether the story chronicled is true or not is wholly beside the point. The duo’s extensive travels have informed their songwriting. And once again, the pair’s strong vocal blend is supported by a crystalline arrangement.

Taylor takes his first lead vocal on “Baggage.” His voice is every bit as pure and unaffected as is Graham’s. Taylor’s warm and friendly delivery conveys a sense of refreshing honesty, and the tune’s use of whistling is quite effective at setting a mood. “Take Me With You” is from an earlier recording session, but it still fits effortlessly into the context of the new album.

“Appalachia Greener” makes use of ambient sounds to establish its feel. The song builds gradually, folding additional instruments into the mix, but the duo studiously avoids over-stuffing the tune. Judicious bits of electric guitar find their way into the the song’s second half. “Better for You” dials the vibe down; it’s the closest The Rough & Tumble come to modern country (the good kind) on We Made Ourselves a Home. The quiet bits when the instruments drop out – leaving only the two singers – are beautiful.

“Steel in My Blood” is breezy pop-country with understated pedal steel deep in the mix. “Cohabitation Physics” is a bit of romantic and lighthearted philosophy featuring a Taylor lead vocal. “Tiny Moses” – the advance single from We Made Ourselves a Home – is a gentle, melodic and brief entry point into the duo’s work. “Bobby & Joanne” is a heartfelt duet that explores relationships in a clear-eyed, realistic (but ultimately hopeful) manner.

The album closes with “Let’s Get the Band Back Together,” a tune that finds Graham and Taylor singing in unison, one an octave above the other. It’s as sunny and bright as anything on the album. The duo sings of rock ‘n’ roll (and then pauses for effect), and – surprise – does just that to wrap up the album. Even more surprisingly, doing so somehow doesn’t feel at all out of character with the other music on this understated and wonderful record.

While on the road, Taylor and Graham find time to author a food blog, a literary blog, and well-stocked Instagram account. And they are already hard at work on a sophomore album, due in 2019.

Tags:asheville, the rough and tumble