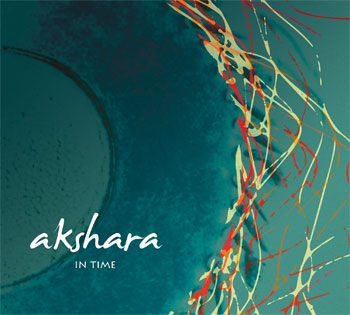 When it first came into the lexicon, the term world music made a kind of sense: though it’s laden with some unfortunate Eurocentric biases, the term was a way of highlighting the music – often of an ethnocentric and indigenous bent – emanating from places other than North America and the European continent. But over the years, the term has become so watered-down as to be rendered nearly meaningless.

Though it was perhaps not their intent, Akshara may well have rescued the term by creating something that truly does draw from – and blend – a variety of musical and cultural traditions. Nominally an Indian music ensemble, the New York City based group cleverly finds and explores the nexus where Celtic, American folk and Indian musics (not to mention other forms) intersect.

One would reasonably expect to hear tabla on an album such as this. And violin isn’t at all unexpected (think of L. Shankar, for example). But violin played in more of a fiddle context, flutes that sound like they come from the Emerald Isle, cello, and even hammered dulcimer are all woven expertly into the songs.

The meditative Indian drone that introduces “Mohana Blues” suggests the sort of thing one might find on a Ravi Shankar album, but the lovely violin solo suggests something closer to European medieval folk. And the vocal interludes on the song may suggest to some the Rajit Banrot spotlights on John McLaughlin’s recent “farewell to America” tour.

The lengthy “Opus in 5” is far jauntier than its title might suggest; the tune proceeds through multiple movements, serving as a kind of whirlwind world-musical travelogue. And in that it becomes an effective sampler for the entire album.