Grace describes Wiard products as “boutique, made-to-order units. Somebody will get in touch with me and let me know what modules they want, and put down a deposit,” she says. “And then—or at the point where I clear whatever I’m working on—I’ll start building. Every single single solder connection is made by hand, by me.”

The sturdy, durable modular units eschew surface mount technology, and are designed for easy repair when needed (“in cases of component failure or moving parts wearing out,” notes the Wiard website, also claiming that Wiard modules are “more than likely to out-live their owners”). Another company (Malaka) produces Eurorack versions of Wiard technology, while Grace’s business focuses solely on 6U modules. “They’re the biggest modules I’m aware of,” she says.

Oftentimes, synth builders get a sense of market trends; thanks to their contact with end users, they are clued-in early to to incipient demand for specific features. But Grace doesn’t find herself in that position. “I’m probably not the person to ask about trends,” she concedes. “People who buy synthesizers are a niche market in and of themselves. Then, in that group, people who buy and play modulars are an even even smaller group. And then you get people who are into these weird, esoteric large-format modulars—of which mine is one—and that’s a really small group.”

Grace says that many of the customers for her modules are “people who do film scores and things like that, people who are looking for some different sounds that you can’t just make with a soft synth plugin.” 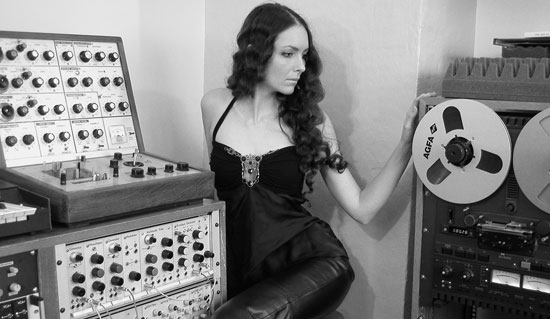 Along with her livelihood as a builder of modular gear, Grace is something of a collector of newer and vintage synths as well. Her studio arsenal—some of which is pressed into use for live gigs, some not—includes a several modulars, a ’70s era Minimoog, an ARP 2600 (serial #13), an ARP Odyssey and a VCS 3. And like most synth aficionados, she has interesting stories about how she acquired some of her gear.

Around the time when she was overseeing the transition of the Wiard manufacturing operation from the U.S. to England, Grace found herself in a conversation outside a Milwaukee bar. “This guy—a student—said to me, ‘Hey, I’ve got this Prophet thing. I found it in a garbage heap, but I’ve never managed to get any sound out of it. Do you want it?’”

Grace arranged to visit the student the very next day. What she found was a rough, severely battered Pro One monosynth from the early 1980s. “It didn’t have any screws in it,” Grace says with a laugh. “It had beer tops inside the case, and it was really filthy.” The student offered it for free, but Grace insisted on giving him $100 for his trouble.

“I took it back home, took the circuit parts out, took everything apart,” Grace recalls. “I cleaned all of it in isopropyl alcohol. It took awhile to get all the crud out of it. And then I lubed all the switches and parts back up with a little oil, and put it back together.” The unit was close to fully functional. After replacing one scaling trimmer on the keyboard and calibrating it, the Pro One was perfect. “There’s nothing wrong with it,” beams Grace. The Sequential Circuits keyboard is now a prominent part of Grace’s studio setup.

In recent months, Grace has been focused on live performances, often at festivals in and around the UK. “So I’ve had hardly any time in the studio this year,” she admits. “But now I’m going to sit down and work on the next album; I’m excited about that.”

Along with making new music and playing live, Grace is current developing new products to add to the Wiard line. “I’ve got some new modules in the works,” she says. “Because the plan was always to not let it stagnate, but to actually contribute to it and add new things to it. And I’ve got loads of ideas.” She frets that there “aren’t enough hours in the day when you’re trying to do loads of gigs, and recording, and building people’s orders.”

Through her years as a musician and synth builder, Grace has been on the receiving end of a lot of advice, “some of which is ridiculous,” she says. “You hear a lot of this stuff like, ‘Oh, you have to figure out what genre you are and stick to it, or you just confuse people.’ Fuck that!” The variety of her music as showcased on her albums backs up her response.

She has taken some advice to heart, though. “There are a couple of things that I always go back to,” she says. One is: ‘If in doubt, take it out.’” The other has served as a creative guide. “If you ever get to where you just don’t know where to go with something, listen to the Beatles,” Grace says. “That usually works.”

Asked if she has advice of her own to offer, Grace pauses a moment. “I wasted a lot of time being insecure in myself,” she says, “thinking I had to do things the way somebody else said was the right way to do it. Because I didn’t know how to do it and they did. You should always be open to learning, but I think it’s very, very important to not let yourself be influenced by people who are saying, ‘This is the wrong way to do it,’ It’s music, it’s art, you know? It’s totally subjective.”

Grace points out the way in which perceptions of music differ. “You can love three of the same songs that somebody else loves, and if you ever get into a conversation about why they like a song, chances are it’s going to be for completely different reasons than why you like it,” she says. “And that’s wonderful. It’s just about our humanity and our uniqueness, and that’s the most important, special, vital thing that we have.”

The most recent Cary Grace musical project to find its way onto physical media is an extremely limited (35 copies) lathe-cut 12” vinyl release. A reading of Pink Floyd’s Atom Heart Mother-era tune “Fat Old Sun,” Grace’s version takes its inspiration not from the brief, relatively simple album version, but from the band’s epic live readings. Grace and her band—once again featuring Budge on bass guitar—spin the David Gilmour composition out to more than 15 minutes, allowing plenty of space for sonic shade and light, and instrumental spotlights featuring organ, guitar and violin. As has become her custom, Grace hand-designed the packaging for the release, likely doing so while simultaneously soldering components for a custom Wiard module.

Cary Grace is used to tackling multiple concurrent projects. “I know I have undiagnosed ADHD,” she says. “I’m either scattered all over the place, or just hyper-focused on something. So, any given day, I might set out to do something and I’ll wind up doing something completely different because I get distracted. But more than anything, life and creation inspire me.”